Since the dawn of civilization, we have stared at the sky with a combination of bewilderment and wonder, trying at once to grasp the seemingly endless panorama of celestial bodies and our place within it. Millennia of star gazing have brought us to the present and the realization that groups of stars can be grouped into constellations that map out familiar patterns. Even more fascinating is that we have created our own constellation that we use to map out patterns on the earth’s surface.

Most of us are familiar with and routinely use the global positioning system (GPS) constellation to help navigate our travel to new locations or simply to find nearby retailers. We do this without a thought to the system that provides us with an invaluable resource. That is, unless you are a PCB designer or developer that creates boards that comprise electronic devices used in the systems of the GPS or similar aerospace applications. Let’s take a look at these systems, as well as their design and development requirements.

The GPS, which the U.S. Air Force operates and maintains, provides space-based navigation, positioning, and timing to devices equipped with the proper hardware and software to process the available information. It is used by virtually everyone, including military organizations and governments, private enterprises, public entities, and individuals. The GPS consists of three segments: the space segment, the control segment, and the user segment. It is also one of a small number of architectures that can be partitioned into terrestrial and aerospace sections.

The terrestrial or earth-based section contains the control and user segments.

16 monitor stations (10 from the National Geospatial-Intelligence Agency (NGA) and 6 from the U.S. Air Force) utilizing advanced receivers track the satellites and collect measurements and data to send to the master control station.

The aerospace section is the space segment of the architecture, which is composed of the GPS constellation. The basic structure of the constellation, as shown in Fig. 1, consists of 24 satellites; however, this has been recently increased to 27 of which the Air Force commits to 95% operation at all times. The constellation is arranged into six equally-spaced orbital planes such that four satellites are visible at all times from virtually anywhere on the planet and each satellite circles the earth twice every day. The constellation operates in mid-earth orbit (MEO) at approximately 20,200km above the earth. The constellation sends data and information directly to individual users. 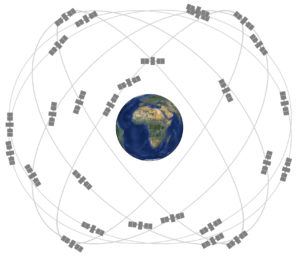 The GPS is a sophisticated system of communication equipment that provides important positioning, atmospheric and time data to various users around the world. The accuracy and precision of this data depend on the quality and reliability of the devices and systems that comprise the terrestrial and aerospace sections. For the GPS aerospace systems of the constellation, quality control is as critical as for all aerospace systems. Therefore, the PCBs and electronic devices on which the operation of these systems depend is heavily regulated. These regulations form the basis of the design and development requirements for the GPS or commercial satellites to which you must adhere.

Prior to design, make sure to establish a QMS according to AS9100D.

Select materials and components that are compliant with AMS2750E.

Ensure that components are traceable and employ counterfeit measures, such as AS5553 to maintain the integrity of the supply chain.

Ensure that your boards meet the physical rigidity requirements of IPC-6011, IPC-6012 or IPC-6013 based upon your design.

Utilize AS9101 to establish and execute the auditing of your QMS.

Utilize AS9102 for first article inspection.

Perform testing as required, based on FCC or other statutory requirements applicable to your design.

Although we have become accustomed to using GPS aerospace systems for daily activities, these systems are no less regulated than other aerospace platforms and must adhere to the same high-quality standards. At Tempo Automation, the leading fast turnkey PCB prototyping service in the industry, we are experienced at producing boards that meet the requirements of your aerospace industry design.

If you are ready to have your design manufactured, try our quote tool to upload your CAD and BOM files. If you want more information on the global positioning system (GPS) or how to design and develop PCBs for the GPS constellation, contact us.

Aerospace Circuit Board Consideration Every Engineer Should Know

Prototype Cost vs. Production Cost: What You Should Know

PCB Fiducial Markers & Why They Are Essential to Manufacturing