A macro view of human history, at least the couple of millennia or so that is recorded, reveals an obvious although not periodic pattern. That is, there has been a rise and fall of empires seeking to maximally expand their influence over basically the same geographical area. A popular HBO series The Game of Thrones epitomizes this activity, which has also been immortalized by the adage “The players may change, but the game remains the same.” During the early decades after humanity’s entry into space, it seemed that this saying would be turned on its head as the infinity of space certainly changed the game. However, the players were limited to a small number of governments. But now, it is becoming clear that not only has the game changed but so have the players. 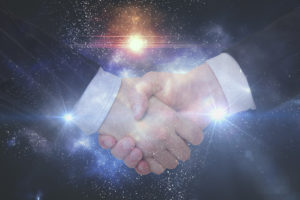 Today, we still view space as the final frontier to explore. Yet, we have gained enough understanding to recognize there is opportunity, as well. The promise of the latter and the sheer vastness of space have prompted governments to not only welcome but also encourage commercial participation. This urging and aid in the form of shared technology and collaboration have been catalysts for an explosion in commercial satellite development, which today accounts for nearly 60% of U.S. orbital aeronautical platforms. Let’s take a look at this transformation in aerospace applications development and how PCB development for these systems has evolved to its present state.

As is the case for much technological advancement, governmental objectives were the impetus that launched man into space. The Soviet Union was the first nation to successfully deploy a satellite, Sputnik, in 1957. The U.S. quickly followed, and by 1962, had the first satellite for commercial utilization, Telstar 1, broadcasting live TV between the U.S. and Europe. Even so, aerospace applications development remained primarily focused on exploration, and in 1969, the U.S. reached the lunar surface of the moon.

During the era when only governments were the primary developers of space platforms for space, the aerospace industry developed a large number of standards and regulations to ensure that electronic subsystems and PCBs were of high-quality and reliable. Additionally, the components that could be used were heavily regulated by standards, such as the NASA Parts Selection List (NPSL). Aerospace applications development during this period, which today is often referred to as the olde space race, was typically quite slow. And systems development to launch could be several years.

In stark contrast to the early days of aerospace applications development when participants were few, the new space race includes hundreds of entities. This includes many more than the original two governments and private companies from around the globe. Governments exert control over aerospace activity that originates from within their borders, and space exploration, including testing spaceflight vehicles for future exploratory missions, is certainly still the objective for a large number of launches. However, most launches are initiated by commercial organizations.

Just as advancement in PCB development, such as increased surface mount device (SMD) miniaturization, have enabled the creation of microcircuit boards and smaller electronics devices with greater functionality for commercial products, so it has for aerospace applications. For example, today’s microsatellites are smaller and cheaper than their predecessors. Other benefits of commercialization in aerospace research and development include a renewed focus on interplanetary travel, reusable rockets, and PCBs and electronics to support passenger transport.

Commercialization of the aerospace industry has also had other significant impacts. One of the most influential is the use of advanced manufacturing techniques, such as agile manufacturing, which enables quick response to design changes such that development to launch cycles can be as short as 18 months, and additive manufacturing, where complex products made from various materials can be created quickly. Another change that has contributed greatly to reducing the development time for space systems is the PCB commercial-off-the-shelf (COTS) solution, which eliminates the long and tedious component approval process that is a major tenet of the old space process.

The aerospace industry is one of the most regulated in terms of product development. The emphasis on quality, reliability, and safety are well-founded and served the needs of old space aerospace applications development. Commercialization changed the landscape and changes that support faster development to launch cycles or new space development are being adopted. PCB development has been both a driver and benefactor of this transition.

To meet the challenges that aerospace application development present, you need to work with a qualified contract manufacturer (CM). Tempo Automation is a certified aerospace CM that brings an advanced process, experience, and a commitment to quality to your PCB development that leads the industry.

If you are ready to have your design manufactured, try our quote tool to upload your CAD and BOM files. If you want more information on developing PCBs for commercial aerospace applications, contact us.