Astronomers estimate there may be as many as 11 billion “earthlike” planets in the universe. That is a huge number of possibilities and virtually all of these are astronomical distances away from us. However, as our observance capabilities increase, we are continually identifying more and more exoplanets, planets outside of our solar system. So far, over 4,000 planets have been found within almost 3000 planetary systems. Of these, 500 systems are located within the Milky Way galaxy. Within our solar system, the earth is indeed unique, primarily due to its size, temperature, and atmosphere. 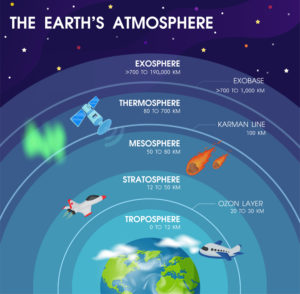 The atmosphere of the earth, which extends from the surface to approximately 480 km (300 mi), is not consistent but instead comprised of layers. In addition to their distance above Earth’s sea level, the layers have different climates and compositions. These and other differences define what type of aerospace vehicles may be used within the layers. For example, there are specific layers for the deployment of satellites, and electronics and PCBs developed for these have specific requirements. By defining the layers, the reason for these requirements will become clearer, enabling us to specify a criterion for developing PCBs for satellite technology that will orbit the earth at these altitudes.

Layers of the Earth’s Atmosphere

The earth’s atmosphere is typically separated into five layers. An additional layer, the ionosphere, is not a separate layer but intersects the two layers highest above Earth’s surface. These layers are listed below, along with their respective heights and relevant aerospace platforms.

As listed above, satellite technology deployment in the earth’s atmosphere extend from around 600 km to the edge of outer space. Although, some satellites orbit at higher altitudes, most are deployed in low-earth orbit, which extends from about 160 km (99 miles) above sea level to 2000 km (1200 mi). At these levels, PCB development requires that you employ a thorough PCB architecture paradigm that ensures you meet all regulatory standards and design objectives while accounting for the extreme environmental conditions.

When developing PCBs and electronics for deployment on aerospace platforms that will be used in any layer of Earth’s atmosphere, it is mandatory to guide the process using a quality management system as defined by the AS9100 standard. Although this standard comprehensively defines the actions intended to provide a qualitative and quantitative framework for your board development, there are additional considerations which will help you in targeting your design, fabrication, and assembly stages for the environment where they will be deployed or must traverse.

The earth’s atmosphere is a harsh environment that includes extreme temperature swings depending on the specific orientation to the sun. Traveling through the layers of the atmosphere exposes aerospace vehicles to various mechanical stress and vibrations. Additionally, radio frequency (RF) communications can be affected by the ionosphere. For these reasons, boards and components that comprise electronics systems are heavily scrutinized for performance, reliability, and quality (to avoid counterfeits).

Designing and building boards for aerospace platforms such as satellites require your development process include essentials to ensure reliability and follow best practices that will help you avoid issues that could ground your aerospace PCBs.

Tempo Automation, the industry’s leading manufacturer of high-quality boards with the fastest turnaround time, is AS9100D and IPC J-STD-001E certified and experienced in building boards for the aerospace industry. Our PCB manufacturing experience will help to ensure you meet all of the demands for your design.

If you are ready to have your design manufactured, try our quote tool to upload your CAD and BOM files. If you want more information on developing PCBs for satellite technology, contact us.