As a fan of Star Trek, I have always been fascinated by some of the tools and gadgets that helped the Enterprise crew escape more than one difficult situation. However, nothing compares to the transporter, which allows for teleportation to remote locations and even passing through solid structures. It may seem surreal, but this type of capability is not prevented by physics. In fact, certain radiation particles, such as neutrons that comprise all matter, can pass through virtually any material. Although this may be great for teleportation, it can also be a major cause of failure for PCBs and electronics that are the drivers of satellite technology systems aboard aerospace vehicles. 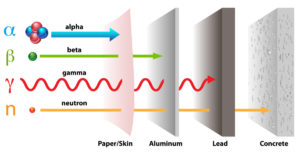 There is no greater threat than radiation to systems that operate in or travel through space. The effects of space radiation on electronics and circuit boards can range from temporary malfunction to long term degradation or complete shutdown. Researching ways to combat this threat has and continues to be a major focus for aerospace companies, NASA and the military. To date, the best defense is the utilization of radiation hardened electronics for space environments. After clarifying the need for radiation hardening and its use in space, we will discuss how to incorporate this protection for your aerospace electronics development.

Why Are Radiation Hardened Electronics Needed?

Radiation hardened electronics may be defined as electronic components, packages and products that have been designed and tested to provide some level of protection against penetrating radiation that may, if unimpeded, cause malfunction, damage circuitry or cause the electronic device to completely shutdown. This protection is necessary when the PCBs or electronics are deployed in environments where they will be exposed to high energy ionizing or space radiation.

There are three types of space radiation concerning PCB and electronic development: galactic cosmic rays (GCRs) - electrons, protons or neutrons that originate outside of our solar system; high energy solar radiation - emissions from the sun due to solar flares or explosions of stored magnetic energy; and radiation belts - consist of trapped electrons and ions of varying energy levels. GCRs and solar radiation routinely reach the earth; therefore, they are present at all of the earth’s atmospheric levels. Radiation belts, such as the Van Allen belt, are present in low earth orbit (LEO) and medium earth orbit (MEO), although its shape is dynamic.

For spaceships and satellites, including new space race miniature satellites, such as CubeSats (example shown in the figure below), continuous, reliable operation depends on being able to withstand space radiation.

And the most effective protection is to develop rad-hard electronics devices and systems.

Developing rad-hard or radiation hardened electronics for space environments once referred to providing external shielding of component, device or product packaging. Although this was generally effective, radiation events remains a problem. However, it has been discovered that the greatest threats from space radiation are gradual degradation or short-duration events. These observations, coupled with the onset of the new space philosophy of smaller, faster and cheaper space platforms and launches have led to the adoption of rad-tolerant as a substitute for rad-hardening in some cases. This new approach is based on determining the level of performance reliability based upon the specific mission and developing boards and electronics based on size, weight and power consumption (SWaP), as well as cost-effectiveness.

In order to develop PCBs and electronics that meet these requirements for protecting against radiation effects the following considerations should be incorporated:

There are two methods that can be employed to improve the hardening of your design from space radiation.

For manufacturing, you must make sure that your contract manufacturer (CM) is certified and capable of meeting the regulatory requirements, primarily of the AS9100D standard, for aerospace electronics development. Additionally, your CM should:

Testing for rad-hardening can be very expensive and should only be implemented if the mission justified its use.

When developing PCBs and electronics for space vehicles, it is incumbent upon you to address the issue of space radiation. There are a number of factors, such as location and solar activity, that will determine how significant of a challenge this will be. However, the extent of damage that can be done requires you to employ some method hardening your product from radiation.

Aside from making good component selections, choosing a qualified CM is the most important decision you can make. In addition to leading the PCB industry in fast, high-quality board prototyping and low-volume production, Tempo Automation, is an experienced and certified manufacturer of PCBs for aerospace industry leaders. We will help you ensure that your boards meet all requirements to be space-ready

If you are ready to have your design manufactured, try our quote tool to upload your CAD and BOM files. If you want more information on radiation-hardened electronics for space environments, contact us.

We Are Open And Serving The Needs Of Essential Businesses. Click here to read the FAQ.