In 1977, a strange radio signal was received at the Big Ear Radio Observatory at Ohio State University. The excitement surrounding this detection translated into it being given the moniker, the Wow! Signal. After more than four decades since this event, many scientists and others have put forth explanations other than the presumed extraterrestrial life source held by many. The jury is still out on this; nevertheless, this occurrence was likely a major catalyst for the founding of the Search for Extraterrestrial Intelligence Institute, in 1984. Today, scientists, researchers, students and laymen around the world listen for radio frequency signals from space. And in 2006, an optical telescope was added to the mission by The Planetary Society. 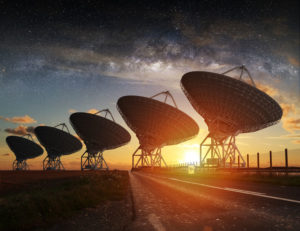 An array of SETI telescopes

Optics are not only pointed out at space, but they are also used quite often as part of aerospace systems themselves. There are advantages and disadvantages to using optical systems, including PCBAs with optical sensors aboard spacecraft. An obvious advantage is data transmission speed as optical signals are ≥ 300GHz, which is much faster than typical RF. On the other hand, at some point, optical signals need to be converted into electronic signals to make use of the wide range of components, boards, and electronics that are available. This means that aerospace environmental concerns exist, and electromagnetic interference and compatibility is an issue faced by optical aerospace PCBAs that your design must address.

Let’s first see how optics technology; including sensors, are used in spacecraft and how that compares with aerospace electronics usage. Then we can identify electromagnetic interference and compatibility issues that must be addressed.

How are Optical PCBAs Used in Aerospace Systems

The addition of optical capability to the arrays of RF telescopes that comprise the search for extraterrestrial intelligence (SETI) system was a great idea, as any frequency may be used for communication. And so is the use of optics aboard space platforms. Common optics devices are sensors and cameras, to detect communications and capture imagery. Fiber optic interconnects are also used to transfer data between boards, devices, and systems. There are also user-defined optical ICs, such as the one shown below offered by Reflex Photonics.

Before using optical PCBAs for your application, you should be aware of the following pros and cons w.r.t. comparable RF electronics.

The advantages listed above are for comparison to a similar electronics only board with the same functionality.

Most disadvantages associated with optics usage in space, as compared to RF, are associated with free space optical (FSO) communications, which may be for uplink and/or downlink with terrestrial transmitters and receivers or for inter-satellite communications. These performance based challenges do not negate the operational and manufacturing advantages listed above. However, they are presented below as designing optical sensor based systems must overcome them in order to be viable alternatives for RF-based applications.

The disadvantages listed above affect the tracking and linking between orbitals or other spacecraft in and beyond earth’s atmosphere. The internal noise disturbances above refers to Relative Intensity Noise (RIN), thermal noise, dark current shot noise, signal shot noise, and background shot noise, all of which are generated by on-board optical systems.

For more information on these optical system challenges, refer to: Optical Communication in Space: Challenges and Mitigation Techniques.

Obviously, there are compelling reasons why optical sensors and supporting devices are utilized for space applications. One of the greatest is that no EMI is generated, since signal propagation between optical components is contained within waveguides, typically fiber optic fibers. Nevertheless, optical PCBAs also contain or interact with electrical and electronic devices for signal conversion, power requirements, or other functionality. This means they are not immune to EMI and compatibility issues.

Although optical technology is constantly improving, the basic advantages of optical signal transmission over RF has been known for decades. And research to develop 100% optical systems has been explored for many applications from computers to aerospace systems. Yet, in most cases, optics and electronics coexist and therefore, must be integrated. This is true for aerospace systems, such as satellites and spacecraft. This integration occurs between optical and electronic circuit boards and on single boards. Thus, aerospace PCBAs that contain optical components, such as sensors, photodiodes and amplifiers, must contend with EMI from onboard radiators, traces, and parasitic capacitance and need to be designed to achieve electromagnetic compatibility (EMC) with their environment.

Space is indeed a harsh environment that necessitates special design and manufacturing considerations are implemented to ensure your boards are space-ready. One of the most important of these is whether radiation hardening is needed. Although light will not penetrate the space vehicle structure in most cases, optical boards are susceptible to incoming space radiation and EMI from nearby devices. Common EMI sources are listed below.

Achieving good EMC means minimizing or eliminating the effects of the sources listed above, which can be done by utilizing good optical electronics design tips.

There are distinct advantages to using optical technology, including sensors onboard aerospace platforms. However, leveraging these does require an understanding of where and how to best utilize optics on your PCBAs.

At Tempo Automation, we utilize advanced technology and software-driven processing to build aerospace boards that exhibit the high-quality and preciseness required of optical boards for space vehicles.

If you are ready to have your design manufactured, try our quote tool to upload your CAD and BOM files. If you want more information on electromagnetic interference and compatibility for aerospace PCBAs, contact us.

[1] Image from Reflex Photonics at https://reflexphotonics.com/applications/optical-ic-package