Just imagine one day humans traveling between planets just as we do now between countries. This may seem like science fiction, but recall that air travel was once thought to be a pie in the sky fantasy. And when you consider that today space flights to and from the International Space Station (ISS) where astronauts stay for periods ranging from weeks to a year are considered routine, it brings interplanetary travel more into focus. Space is, of course, a harsh environment where temperatures range from extremely cold to exceedingly hot. In order to safely navigate through such an environment requires that spacecraft have reliable thermal management. 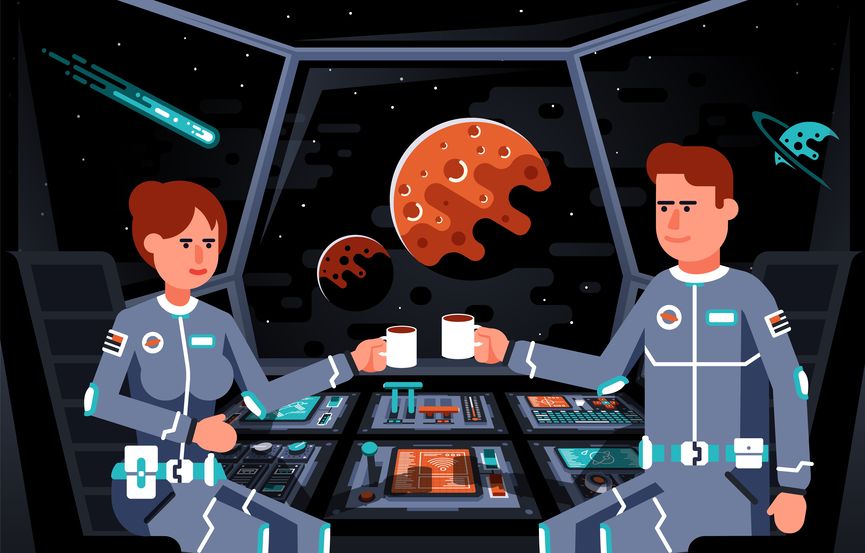 Managing or controlling the temperature is not simply necessary for humans, it is required for all vehicles or platforms that pass through or operate in space. Although, the effects of external conditions are a major concern they are no more so than the consequences; including mission failure and system shutdown, that may develop as a result of not maintaining internal thermal stability. Therefore, the importance of the thermal control system and the role of the electronics and PCBs that comprise it cannot be overstated. First, let’s see how thermal control systems are used aboard spacecraft and then how best to develop the boards that are critical to their successful operation.

If you have ever been confined to a windowless office or laboratory during the midst of summer without air conditioning then you have an idea of the need for thermal management. As unbearable as this is for a day at work, just imagine enduring this for months or longer in space. Ensuring this situation does not occur is the responsibility of an aerospace thermal control system (TCS). However, this is probably the least important of the duties a TCS may be tasked to perform. More critical is isolating internal compartments that require different thermal conditions from each other and maintaining the temperature within an acceptable operating range for onboard equipment; especially electronics and circuit boards.

Isolation is necessary to ensure that temperatures for different types of systems are maintained within the specified ranges required for the elements, devices, and components that comprise the particular system under control. For example, mechanical and electronic systems and (especially) optical systems typically have well-defined and different temperature windows in which they operate. Electronic systems aboard space vehicles are subject to a number of threats. These include external radiation, mechanical stresses due to motion and vibration and temperature swings. The use of radiation-hardened electronics, test-supported PCB material selection, and thermal control systems are the most effective in mitigating these threats.

Thermal control systems can be passive or active and most spacecraft have both. Passive systems typically utilize a mechanical, chemical or other material property to limit variation or achieve thermal equilibrium. Examples include piping, belts, thermal coating and layering; all of which do not require an external power supply. Active systems, on the other hand, offer more precise control, quicker response and extended temperature range beyond ambient. Achieving these objectives necessitates monitoring, data acquisition, processing, conversion, and distribution by electronics and circuit boards.

The thermal management of a spaceflight vehicle is a dynamic series of actions that are initiated preflight and extend throughout the lifecycle of the mission. However, the considerations that impact thermal control system operation vary for different stages, as listed below.

To ensure safe operation, the design and manufacturing of the thermal control system PCBAs must incorporate the above concerns, while also adhering to the thermal limitations of their own deployment environment. Although these may at times seem to be opposing objectives, your TCS board development can meet this challenge by following guidelines, such as those listed below.

For sensors to be effective, they must be located in or near the targeted area. Therefore, it is important to build sensors based on the specific location where they will be used aboard the spacecraft.  Examples include having a BMS near a battery, or a thermistor near the place where the temperature needs to be controlled using a Thermoelectric Cooler (TEC).

The thermal characteristics for components vary. For example, some passive components have a nearly linear temperature-parameter profile over some ranges. This must be incorporated into your board’s design as it will affect performance. Therefore, it is best to utilize class-S (space-grade) components for maximal reliability and durability.

The thermal requirements for manufacturing and operation are not the same. Just as PCB material selection must be optimized for the mechanical stresses of spaceflight, it is also important to make sure that thermal constraints will not be violated.

Developing your thermal control system PCBAs with the above listing as a guide does not take the place of any regulatory requirements; nor are they alternatives to other good aerospace board design tips. Instead, it is intended as an augmentation that specifically targets the thermal control system.

The thermal control system is one of the most critical parts of your spacecraft as it seeks to ensure that all operations can be performed under the most favorable conditions.

Therefore, the development of boards that comprise this system must incorporate special considerations as listed above. At Tempo Automation, we have the experience and expertise to help you build TCS boards that will meet your space platform’s requirements.

If you are ready to have your design manufactured, try our quote tool to upload your CAD and BOM files. If you want more information on aerospace thermal control systems and how to best develop boards for them, contact us.

What is Quality 4.0 and How Does it Impact Industrial PCB Development?

The Advantages of Incorporating Digitization in PCBA Development

What is Virtual PCBA Contract Manufacturing, And Why is it Necessary?

How to Use PCB Design Verification to Streamline Development

The 5 Most Important PCBA Manufacturing Capabilities

How to Optimize a Digital Thread’s Supply Chain Continuity