What are they for?

The LED is a great introduction to electronics, because you can see it working! The LED only works when its polarity is set correctly. Since the symbol looks like an arrow, this is easy to remember.

In the classic LED example circuit with a dropping resistor, finding a resistor value to get the right current in a LED circuit can be difficult. It will vary with the color of the LED and the supply voltage. When there are a string of LEDs in series, the small variations in LED voltage stack up.

The current diode is like a resistor, except instead of having a current that is proportional to the voltage, it has a constant current over some range of voltage. 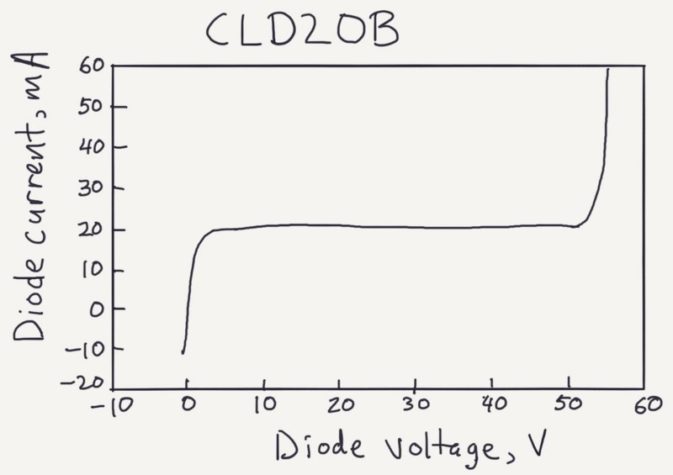 As long as there is more than some minimum voltage across the current regulator diode, it will pass the same current. For the CLD20B current diode, it takes about 4 volts to get to 20mA. On the right side of the graph, you can see that the current goes up if the voltage is too high, such as at 50 Volts. The power dissipation in a diode is it’s voltage drop times the current. At 50 Volts, the power in the diode will be 50 Volts time 100mA, which is 5 Watts. This will burn up the diode quickly, so don’t do that! 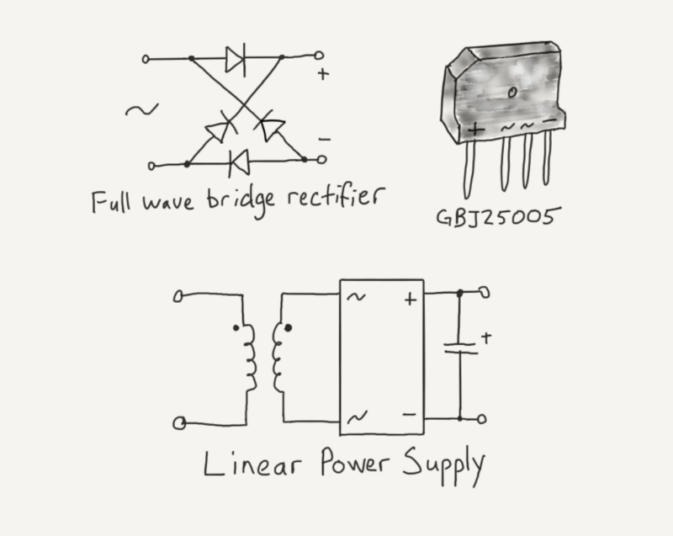 The Full-Wave Bridge Rectifier (FBWR) is a bargain among power diodes. If this is your circuit, using a packaged FBWR is much easier than using four discrete diodes. The input terminals are interchangeable. They are easy to get and operate at high currents, which means that you can design with a lot of current margin. 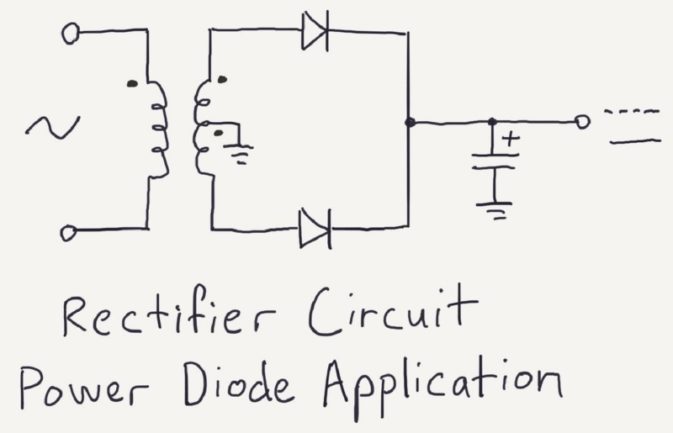 To really understand the power rectifier, there is the transformer to deal with. Transformers are a challenge to understand because of the isolation between the primary and secondary. It can be hard to see how or why some of the circuits work. If you have a center-tap on the output side of the transformer, the above rectifier is better, and you can use a dual power diode with a common cathode. 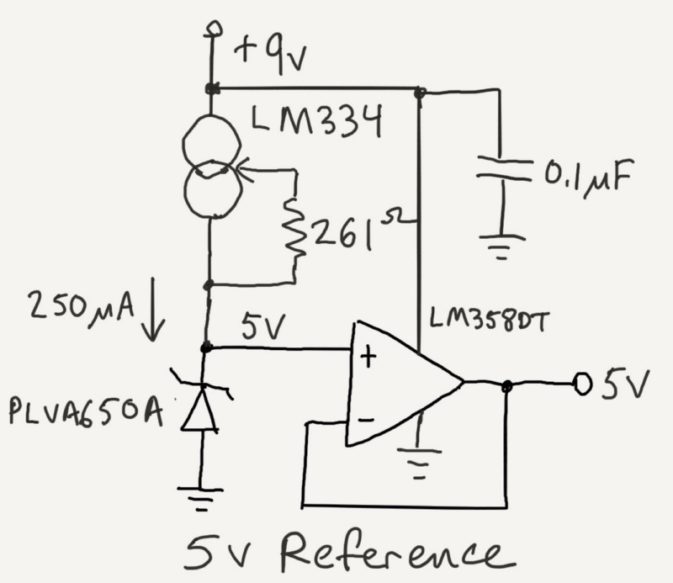 A Zener diode takes advantage of the limited breakdown voltage. 5V is a non-standard Zener voltage, so you should probably use a different voltage! Like resistor and capacitor values, there is a list of standard voltages for Zeners. 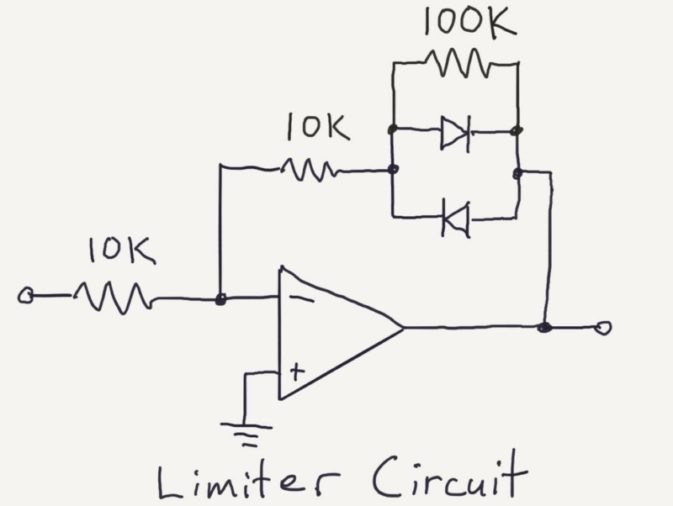 This is useful for audio signals. The diodes in the feedback turn on when the output signal is large enough. When the diodes are on, the gain changes from -11 to -1. 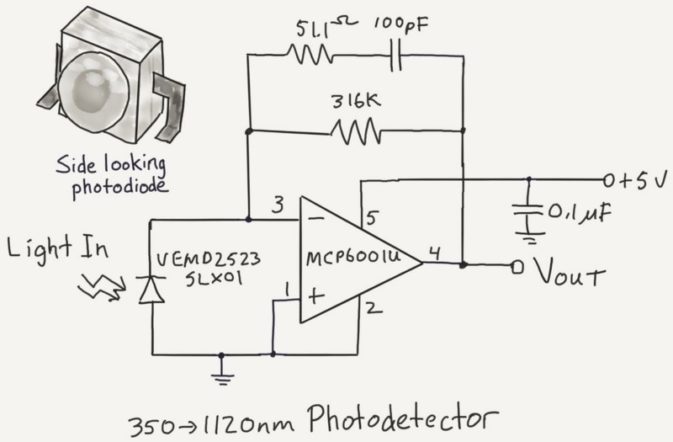 A photodetector diode or an LED can be used to detect light. This circuit uses a photodetector diode. These diodes are typically 10X more sensitive than LEDs, and are available with different sensitivities to a various ranges of color. This example circuit is sensitive to a wide range of colors. 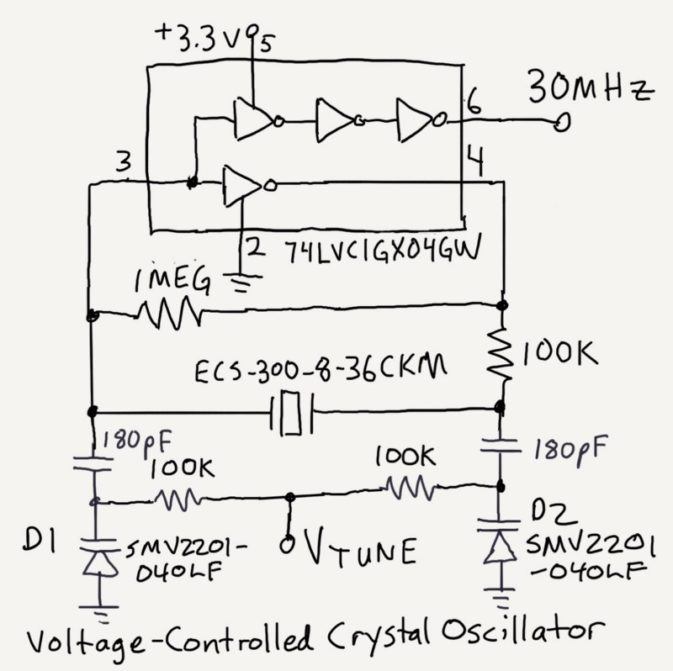 A diode that is reverse-biased has some capacitance that varies with voltage. Some diodes are designed to do this in a predictable way. 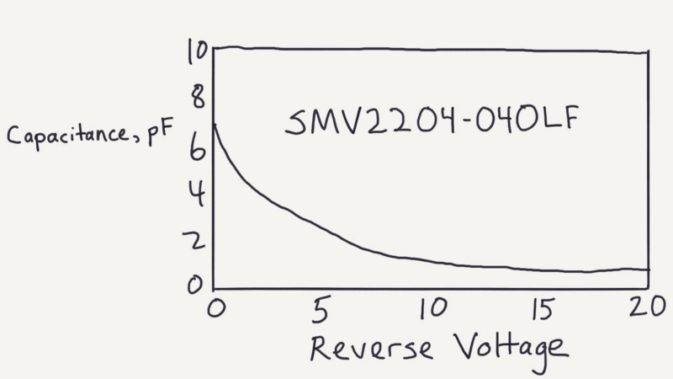 This can be used in an oscillator circuit to vary the frequency. In the case of a crystal oscillator, it can be used for a fine adjustment. For other types of oscillators, the range can be much larger, about 2:1 in frequency range. 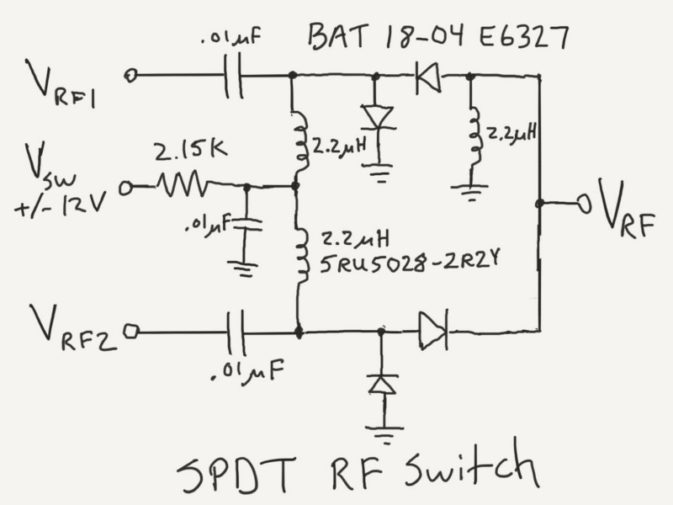 Switching RF signals can be done with switching PIN diodes. They are designed to have a small RF resistance when the are turned on, and a very low capacitance at reverse voltage. For example, with a forward bias of 10mA, the BAT 18–04 E6327 has a resistance of 1 Ohm. At -12V, the reverse capacitance is less than 1pF.

This switch example requires a drive circuit that can swing to both positive and negative voltages. The inductors are designed to be high impedance over some range of frequency. When used this way, the inductors are also called RF chokes. 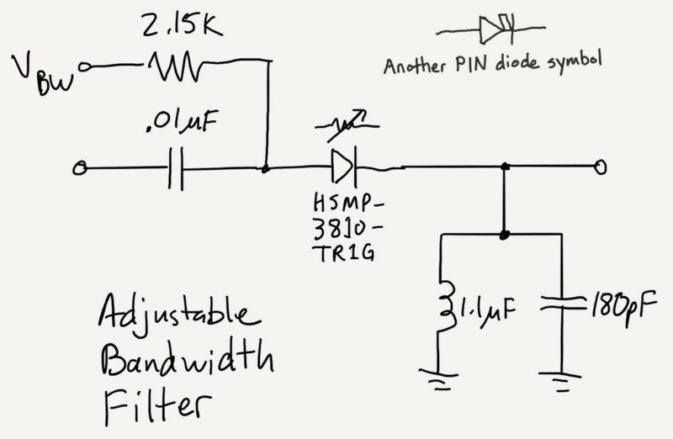 Here’s one you don’t see very often. A variable PIN resistor can be used to create a variable bandwidth filter. The resistance is set by the current in the pin diode. Lower currents have higher resistance. 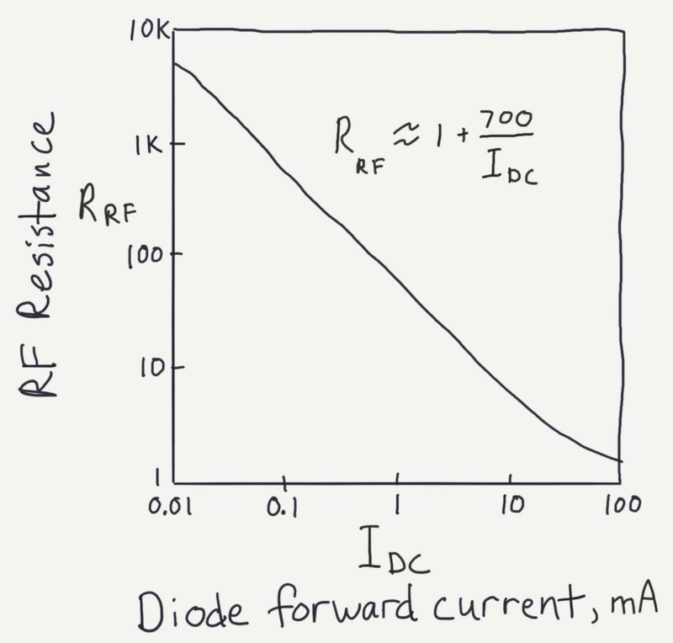 The graph shows how resistance varies for the HSMP-3810-TR1G diode. The same concept is used in variable RF amplifiers and attenuators. 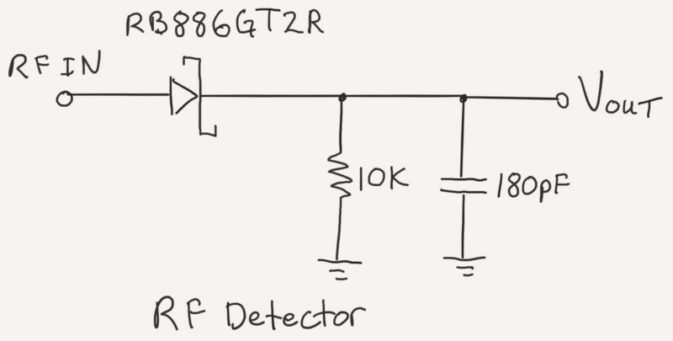 This circuit can be used to detect RF signals. The DC voltage at the output is created with there is an RF signal at the input with enough voltage to turn on the diode and charge the capacitor. By connecting an antenna to RF IN and a voltmeter to Vout, this circuit can detect nearby radio transmitters.

To get the best sensitivity to detect weak RF signals, use the lowest voltage diode possible. This is a Shottky diode, which turns on at about 0.35 volts. The Shottky in this design also has very low capacitance. Too much capacitance will load down the RF input. This diode has about 0.8pF capacitance at 0V. This detector will begin to lose sensitivity at frequencies above 2GHz. An RF designer can fix this problem for you, and detect higher frequencies with a similar circuit.

This Schottky diode is easily damaged by ESD. Just 5v of reverse voltage at the input can destroy the diode.

What special handling do diodes require?

Moisture — some need to be kept dry, especially LEDs. If they get moisture inside the package, then during the board soldering process, a few of them will pop like popcorn.

Diodes are ESD sensitive. Some such as the TVS are designed to be rugged and can be used to protect other weaker circuits, including weaker diodes. 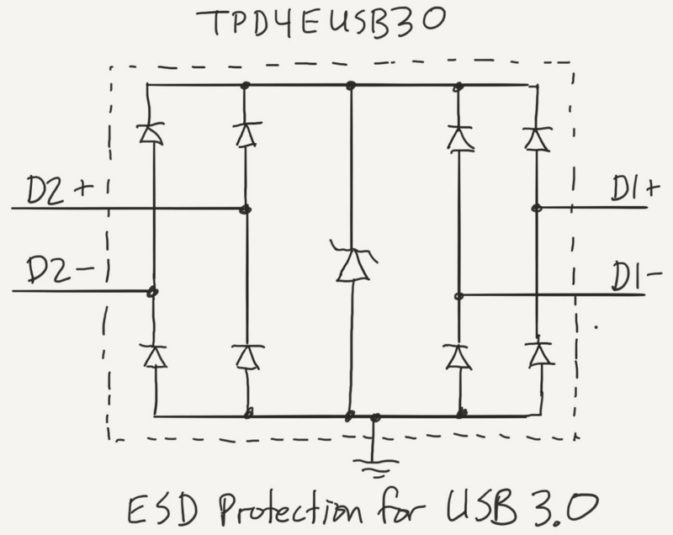 Protection devices for ESD are important for reliability. They take advantage of the Zener as well as by dumping static charge into the supplies, where it can be absorbed by the capacitors. 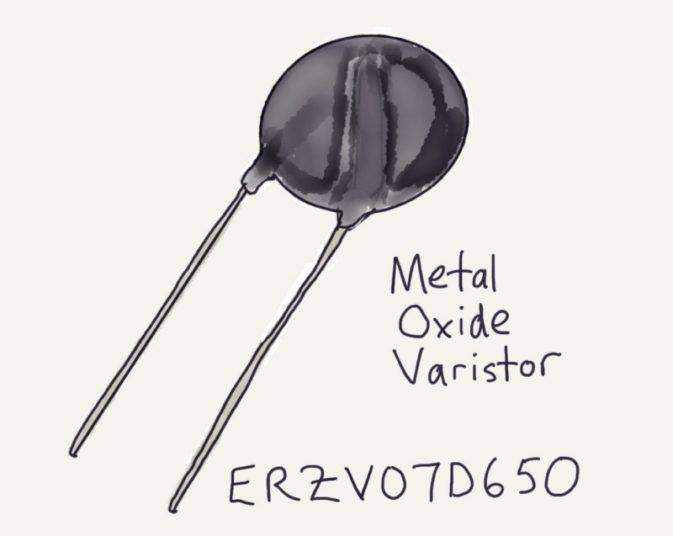 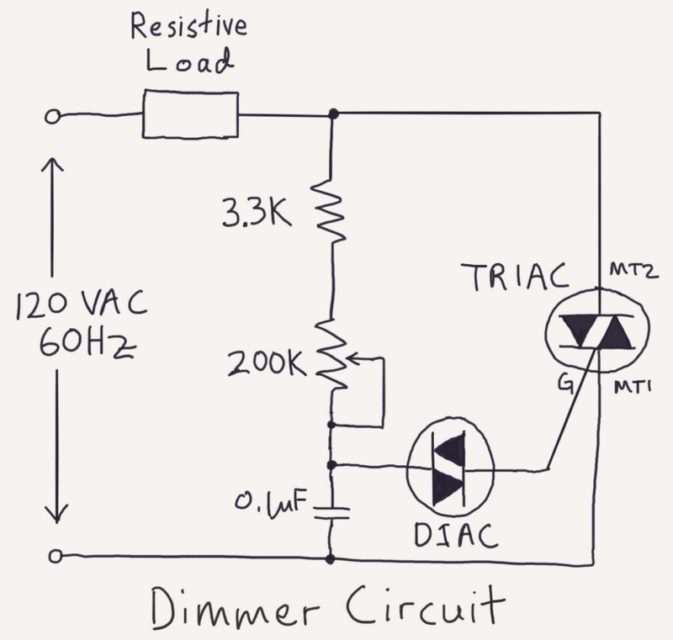 The classic dimmer circuit uses a DIAC, which is an unusual diode. Maybe it shouldn’t really count as a diode, but the symbol sort of looks like one. It is a diode that doesn’t turn on until it gets to a certain threshold voltage. Then it remains on until the voltage across the diode goes back to zero.

For example, a LED sometimes makes a good photodiode. You could design a photodetector that uses a LED instead of a photodiode, and it would be cheaper. It happens to work. The LED is not specified to work as a photodiode. You might buy another batch of LEDs with the same part number, and they may not happen to work nearly as well.

If you want to design this way, buy a lot of parts, and test parts throughout the lot. If they work, store the parts carefully! With each new batch of parts, a redesign may be required. It is often better to use a more expensive, specialized part that is designed for the job to be done.

I prefer using parts in a way that the manufacturer specified, rather than being clever. In this example, the photodetector can be designed to work. It detects light in a way that is specified on the photodiode datasheet.

Good datasheets have good example circuits that show off what the part is supposed to do. After building a few circuits based on datasheets and seeing if they work, I can tell if I like a part and the company that created it. If you want to hear electrical engineering stories, try asking a circuit designer which manufacturers they like best, and who has the best datasheets?