Have you ever wondered why some PCBA capacitors look awfully similar to batteries? Could it be that caps and batteries function similarly? Actually, they perform the same basic function in many cases. That is, they both store and discharge energy. Then, what is the difference between capacitors and batteries? Good question. For one thing, capacitors store energy in an electric field, while batteries typically store energy chemically. Another difference is that electrons actually flow through batteries. This is possible due to the electrolytic chemical that separates the anode and cathode, which are comprised of different elements. 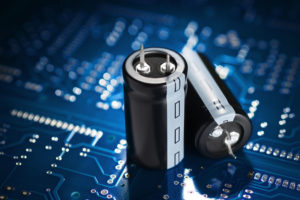 Conversely, current is not intended to flow through capacitors internally; since there is no physical connection between the conducting plates. Although capacitors are not designed or built to facilitate internal current flow there is usually some amount of DC leakage current between the plates. Capacitor material, temperature, and voltage all impact the amount of leakage current. The importance of this factor depends upon the level of capacitance and the application. Regardless of the source, charge dissipation is an unwanted reality when utilizing capacitors in electronic circuits.

Not only are there unwanted attributes of the actual capacitors used to be considered when designing and manufacturing circuit boards, but there are also undesirable parasitic capacitors that can manifest, as well. This parasitic capacitance effect can adversely impact your board’s operation. In most cases, these effects cannot be completely alleviated; however, there are design and manufacturing techniques that can mitigate most of these. Before presenting these reduction methods, let's first define the major culprit, PCB stray capacitance.

Why and How PCB Stray Capacitance Occurs

Whenever two or more elements or materials that are in close proximity to each other are at different charge potentials there will be stray capacitance between them. If so, an electric field may “accumulate” or store energy that can produce an unwanted current flow provided a path exists between the charged elements or materials. As an example, consider an operational amplifier that has an internal stray capacitance.

Capacitors are primarily used in electronic circuits to block low-frequency and DC signals and pass high-frequency signals. This latter property (the speed at which capacitors discharge energy is another reason they are used instead of batteries that are much slower) is why stray capacitance is a more significant problem for high-speed circuits. For conductors, stray capacitance can introduce EMI or noise that will propagate down wires and cables or transfer to nearby adjacent traces. Completely eliminating stray capacitance is not usually not possible. Yet, there are effective ways to mitigate it on your board.

Stray capacitance is one of those physical attributes that are inherent to electronic circuits and circuit boards. Nevertheless, the effects can be implementing the techniques listed below.

How to Reduce the Effects of PCB Stray Capacitance

As ground planes can increase capacitance with adjacent conductors due to proximity, it can be helpful to remove an inner-layer ground plane to increase the distance which will minimize the capacitive effects. This has to be balanced against the benefits of minimizing EMI that is gained when ground planes are adjacent to signal planes.

A Faraday shield is a ground trace or plane that is placed between two traces to minimize the capacitive effects between them and it, like other shielding structures, is effective at minimizing stray capacitance.

Another effective mitigation technique is to increase the spacing between adjacent traces. As capacitance decreases with distance this is a very good approach when it can be applied.

Vias are the key elements that make compact, complex PCBAs possible. However, excessive use can increase your parasitic capacitance issues; such as stray capacitance. This PTH coupling can be reduced by eliminating annular rings around vias on layers where there is no connection and minimizing the number of vias from components; such as BGAs.

Just as we have to live and make allowances for the impurities of materials that lead to charge dissipation in capacitors, we must also incorporate techniques to mitigate PCB stray capacitance into our circuit board development. At Tempo Automation, not only do we build PCBAs the fastest in the industry and at the highest quality, but we also can provide support to assist you in dealing with issues; such as the effects of unwanted capacitance.

If you are ready to have your design manufactured, try our quote tool to upload your CAD and BOM files. If you want more information on PCB stray capacitance and how to mitigate its effects, contact us.