How to Use Your PCB Trace Width to Improve Signal Integrity

For well over a decade, I used to commute from a rural area to the city for work. On some days, I relished the time to mentally prepare and focus on the day ahead, but on most days, it was quite stressful. What made me the most anxious was my inability to accurately judge how long the trip would take. One day, I would arrive very early. On another, I would literally sprint from my car to avoid being late. The reason for this wide range of arrival times was the daily change in the amount of traffic that would often simply exceed the road’s capacity. Eventually, the road was widened and my morning drive settled into a predictable commute. This whole ordeal reminded me how PCB trace width and associated parameters can be used to control signal integrity and current flows on your board.

When designing the board layout for your PCB routing, traces may be the most important consideration. This typically involves following good layout design guidelines, such as selecting proper placement and spacing of routes and vias. Far too many designs pay little attention to trace widths, aside from staying within contract manufacturer’s (CM’s) tolerances. In fact, PCB trace width and via size can have a great impact on signal integrity and current flow. To quantify this concept, let’s take a closer look at signal integrity and how it can be controlled by your PCB trace widths. 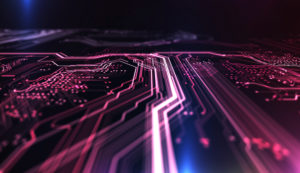 What is Signal Integrity, Exactly?

Signal integrity may be defined as the measure of an electrical or electronic signal’s tendency to maintain its initial properties as its traverses a medium or path. A signal that arrives at its destination or receiver with the same amplitude, phase, frequency, power and waveform it had when leaving its source would have perfect or absolute signal integrity. Unfortunately, this situation only exists in theory or inside a vacuum. Practically, signal integrity is modified in some manner regardless of the path and in some cases, these modifications to signal integrity can severely impact the reliability of your device.

Digital, which is essentially analog, electronic devices rely upon the ability to accurately determine whether a signal is representing a high state or low state. Determining the state requires the definition of a threshold above which a high state is interpreted and below which a low state is interpreted. In some cases, the rate of transition between different states is also necessary. When a signal has been altered such that these determinations cannot be made accurately, the performance of the processing device or system becomes unstable, erratic or unpredictable.

For PCBs where the electrical and electronic signals are considered to be of relatively low frequency (< 50MHz) signal integrity is typically not a significant concern since signal transition times1 are shorter than the delay for propagation across the board. However, for boards that employ high-frequency digital components a number of signal integrity problems may arise, including:

Although the above signal integrity problems above have different sources, all of them are impacted by your board traces.

How to Use PCB Trace Widths to Solve Signal Integrity Problems

Signal integrity can be a major problem on any PCB; however, for data and signal processing boards it may be the most severe issue that must be solved. For example, boards that perform sensitive functions in medical devices, aerospace or automotive systems may experience misdiagnosis, loss of control or even fatalities. For these reasons, your design should always follow your contract manufacturer’s (CM’s) guidelines for PCB layout and via selection. In addition, you can also strategically utilize your PCB trace widths to generate the best design for signal integrity.

All signals are modified by the properties of the path, trace or via, along which they propagate. Most notably, is the impedance that affects signal voltage and current amplitudes and frequencies. The impedance can be manipulated by changing trace length, thickness and width. If trace length and thickness are held constant or are fixed then the impedance can be completely controlled by altering the trace width. The following table summarizes how we can use this relationship to solve the signal integrity problems defined above.

Signal integrity is an imperative performance attribute that cannot be compromised for accurate data transmission and critical systems. Tempo Automation, the industry leader in PCB prototyping and low volume manufacturing, has the capabilities and expertise to work with you to achieve the high-quality results you require for your boards.

If you are ready to have your design manufactured, try our quote tool to upload your CAD and BOM files. If you want more information on PCB trace widths and how they impact signal integrity, contact us.

1 For analog signals in general, this is the time between positive and negative peaks. For digital signals specifically, this is the rise and fall times.