One way to really get your heart racing is to have a little thermal accident when first powering up a new printed circuit board during testing. Maybe you will only get a small wisp of smoke, or perhaps you’ll hear something pop. You may even get some actual flames, prompting someone to grab a fire extinguisher. Whatever the symptoms may be, the results are usually the same: everyone will gather around and start pestering you with annoying questions. There is also the inevitable joker in the crowd who will innocently suggest that this kind of testing should be reserved for the winter when it is cold outside. Then your boss will appear, and you will really start to sweat. 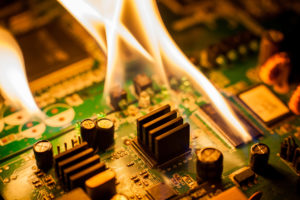 The best way to avoid this kind of stress is to prevent such thermal problems from happening in the first place. One way to do this is to ensure that the traces in your PCB design are wide enough to handle the current being passed through them. Most signals do just fine through the regular trace widths that are routed on the board. Those traces that are conducting power, however, require more attention to make sure that they will not burn up. Here are some examples of why a PCB trace width vs current table is important, and how it can help on your next design.

Why a PCB Trace Width vs Current Table is Needed

The problem that you are trying to avoid is an abundance of heat. The more current that is running in a trace, the hotter the temperature that the trace will operate at. In order to dissipate this unwanted heat, you need to use a larger trace. The cross area of the trace (width and thickness) is what defines the amount of current that it can handle. By knowing how thick a trace is and the amperage that it will need to carry, you can figure out the correct width needed for routing in order to keep the temperature at a desired level.

The thickness of the trace is determined by how much copper is being used on that layer. Printed circuit board copper is defined by its weight, and the weight is determined by how much copper it takes to fill one square foot of area. One half ounce of copper, if spread evenly across one square foot, will give it a height (thickness) of 0.7 mils. One ounce is 1.4 mils thick and two ounces is 2.8 mils thick. Therefore, if you are using a board layer with half an ounce of copper on it, the traces will be 0.7 mils thick.

With this information and knowledge of the amount of current that will be flowing, you can now calculate the trace widths that you need. The chart below is a standard chart that has been used by PCB layout designers for many years. Even though it is “old school,” the information in it is still a good example of the calculations that need to be made. Even though our technologies have grown over the years and we have much more precise tools to work with, data like this chart is still useful because the physics involved are still the same. 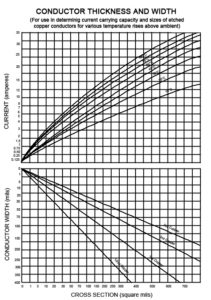 What a PCB Layout Designer Does with This Information

Using the chart above, the PCB layout designer can make the trace width determination through a couple of different ways. If you know your current and desired temperature, you can start at the top and work down towards the bottom to find out what trace width to use. If you know what width you would like to use and want to find out what current it can handle at what temperatures, start at the bottom and work up. It depends on what data you have and what data you need to obtain. For our purposes, let’s start at the bottom.

On the bottom left side of the chart, we can find a line for a 50 mil wide trace. Follow that line out to where it meets the first diagonal line for ½ ounce copper, and then go straight up to the top half of the chart. Assuming that our trace will be carrying 2 amps of current, stop at the 2 amp horizontal line. Here, you will see according to the curved temperature lines that our trace will have a temperature rise above ambient of about 12 degrees Celsius (° C), or 53 degrees Fahrenheit (° F). If the ambient temperature is already at 72° F, then this trace is going to operate at 125° F, which exceeds the temperature at which you can get burned (109.4° F). If our current doubles to 4 amps, however, the trace is going to rise to about 67° C over ambient, or 224° F when added to the ambient temperature. That’s getting pretty hot!

Without the proper calculations, a PCB layout designer could inadvertently create a fuse instead of a trace in the design. Or worse, end up with a small campfire for a printed circuit board. The way to fix this problem is to either increase the width of the trace, the weight of the copper, or both to increase the trace cross area for proper heat dissipation. To be fair though, a chart like this is great for an example but it does leave a lot of wiggle room in the numbers. Graphed out like this it is simply too much data to get a fix on accurate values. For more precise calculations, for example, to determine the copper weight and/trace width changes that will result in the standard 10° F rise, there are better resources available to you.

Where Can This Data be Found?

For more precise trace width calculations, you can find plenty of online calculators. A lot of these calculators are, however, based on the data curve found in IPC-2221, which has since been updated by IPC-2152. You can also download and purchase calculators from other sources as well that will have more capabilities built into them. The important thing is to determine what your trace widths need to be for your higher current lines before you route the board in order to avoid thermal problems later on. Remember, it also doesn’t hurt to add a little extra width to those power traces just to make sure that you are well covered.

At Tempo Automation, we are ready to work together with you in order to ensure that your PCB design is ready for manufacturing. We have the experience and the resources that you need to make sure that your design is manufactured to the highest levels of quality.

If you are ready to have your design manufactured, try our quote tool to upload your CAD and BOM files. If you want more information on generating a PCB trace width vs current table, contact us.

[1]  Charts available in IPC-2152 Standard for Determining Current-Carrying Capacity in Printed Board Design.