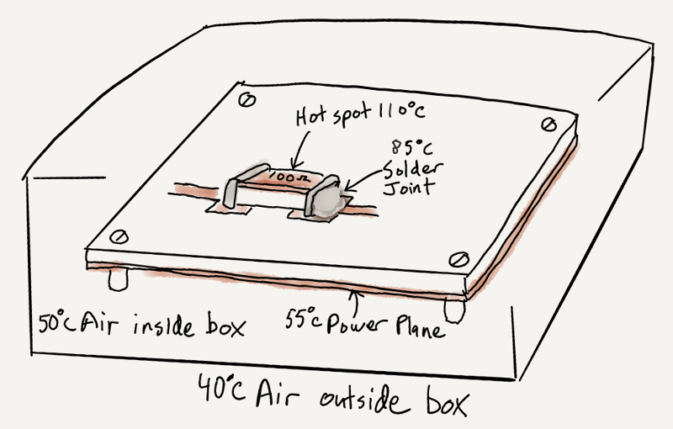 I often get questions about how much power can be safely dissipated in a surface mount resistor. Surely there must be some limit?

The problem with too much power in a resistor is that it gets too hot. The questions is then how hot does it get, and how hot is too hot?

As the resistor dissipates power, the hottest spot is in the resistor film. Heat then flows from this hot spot to the environment.

What exactly gets too hot? There are three possible weak spots:

The resistor solder joint: After a while, a hot solder joint becomes brittle. Then it breaks.

The printed circuit board material: After being too hot for a while, circuit board material turns black. Your customer notice the distinctive smell of burning electronics. Then the board will delaminate, absorb moisture, and fail. If the solder mask is black, these problem are harder to isolate!

I want my solder joints to operate below 105°C. To have margin, I aim for a maximum of 95°C. My circuit boards can run in ambient temperatures as hot as about 65°C. This leaves about 30°C of allowable temperature rise for a resistor solder joint.

The general idea of thermal design is to provide a path for heat to flow from hot to cold. To cool down a hot resistor, the best trick is to use wider PC board traces to improve the flow of heat away from the part. Thinner FR-4 PC boards also help, as do thicker copper conductors.

My Rule of Thumb

Thermal design would be easier if we could believe that resistors always stayed cool enough up to their rated power. Things are not so simple. A mechanical engineer once told me “You can’t reduce all of heat transfer to a single number.” But everyone wants a simple number. So here it is:

Above these power levels, make a note on the schematic. The note should say how much power is being dissipated and how wide the traces need to be. This documents the requirement for the future.

In layout, don’t place hot parts right next to each other. Even if the nearby hot parts are on the other side of the PC board, this still counts as nearby. Two hot parts close together get almost twice as hot as a single part.

Like all rules of thumb, if you don’t know where it comes from, it can get you in trouble! Read on to find the origin.

To go beyond the rule of thumb, here is a quick refresher on the electrical analogy for heat transfer. 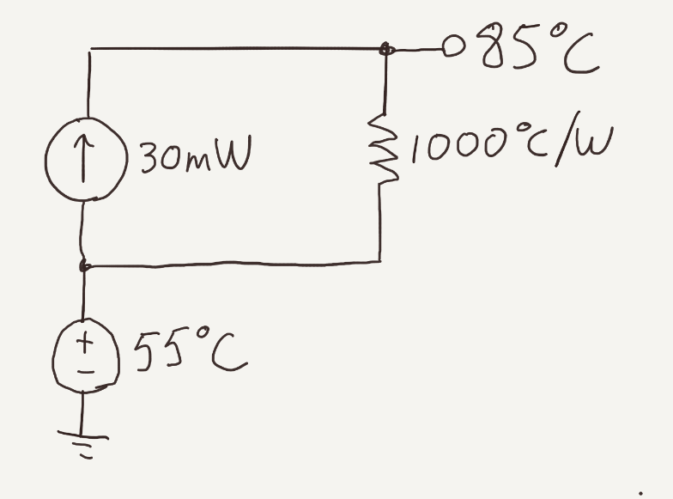 From here on, I am going to assume that you already understand the basics of thermal models. For more information, see these tutorials from TI:

Understanding Thermal Dissipation and Design of a Heatsink

AN-2020 Thermal Design By Insight, Not Hindsight

The case I’m going to show is for a long trace that is above a solid copper layer. The heat flows through a long circuit board trace, through the FR-4 material, and then into a power or ground plane. While the assumptions in this model have worked well for me, they can always be improved at the cost of more complexity.

The trace is “long.” This means is that if the trace was any longer, it wouldn’t conduct away significantly more heat. (Short traces are covered later.)

The trace is “narrow.” This means that the temperature along the width of the trace is uniform.

The copper layer under the trace is at a uniform temperature, which is set to zero in this analysis. It is easier this way, because the temperature rise is easier to calculate, and later it can be added to the actual temperature of the copper power plane.

Using these assumptions, the circuit model for the trace is a resistor ladder transmission line.

To solve the thermal problem, break the trace into segments along its length.

The solution for finding Rt is an analysis trick. Since there are an infinite number of resistor sections along a long line, each section is loaded with the impedance Rt. 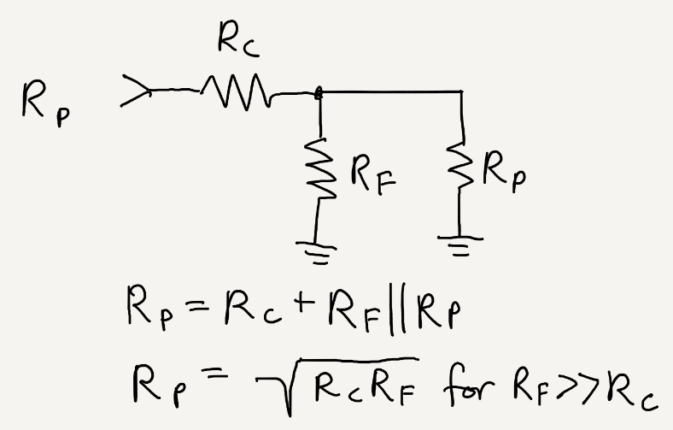 This leads to an unusual circuit analysis, because Rp is both the resistance looking in to the ladder network section, and it is also the load resistance. Solve the circuit equations using the quadratic formula, and eliminate the small terms using Rf >> Rc. This leads to the solution for thermal impedance of the trace. 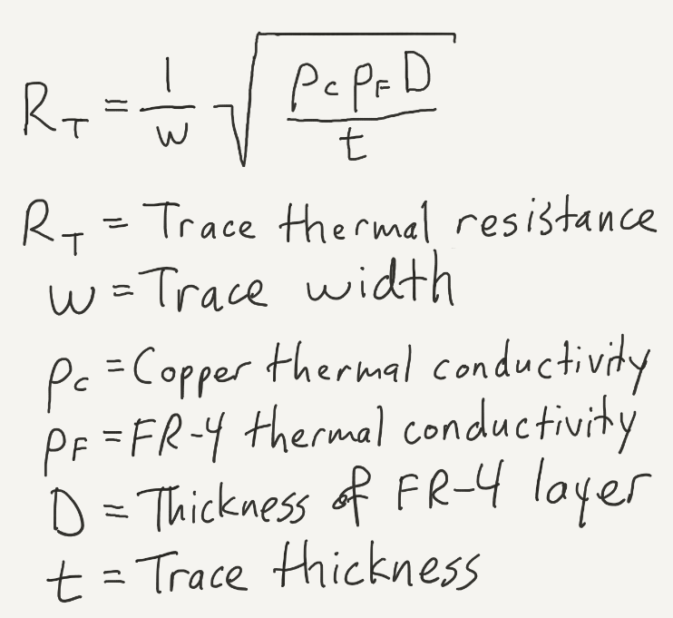 The segment length X does not appear in the equation.

The solution does require the ‘material properties,’ which are the thermal resistances of copper and FR-4. It also includes the trace width and thickness, and the thickness of the FR-4 material. The FR-4 material has a different thermal conductivity in different directions. There is lower thermal resistance along the plane of the board, because the glass fibers conduct heat better than epoxy. This analysis uses the vertical conductivity.

Let’s plug in some typical numbers and see what we get:

Now you can see where the 30mW rule of thumb comes from! It is for 6 mil traces, 28 mil thick FR-4, and 1.5 oz copper. To double the allowed power dissipation to 60mW, use 12 mil traces. Or, if you have thinner FR-4 between the trace and the power plane, the thermal resistance goes down as the square root of the FR-4 thickness. Trace width is an efficient way to improve the heat transfer because it is outside of the square root function. More trace width increases the horizontal heat flow by having more trace copper cross sectional area, and it also improves the vertical heat flow by creating more area for heat transfer through the FR-4.

At some point, as traces get wider, the thermal limit is no longer set by the solder joint. Instead, the limit will be set by the hot spot in the resistor film. To stay below this limit, do not exceed the manufacturer’s power rating for the resistor. Or, make your own thermal model that includes more details.

Short traces can also conduct heat well, especially when they are connected to a power plane through a via.

These thermal resistances can be calculated with the same formula shown above in ‘Thermal Resistance of a Rod.’ In this case I am ignoring the FR-4 material because it doesn’t conduct much heat. I did account for the hollow via with a copper wall of limited thickness. Some designs use conductive epoxy to fill the vias in order to get lower thermal resistance. This via process adds some cost and fabrication time to the build. It is commonly used in sensitive designs such as power LED lighting. Conductive-epoxy filled vias can make a big difference in reducing temperature and improving reliability.

The short trace having a much lower thermal resistance than the long trace, because the via to the power plane is a lower resistance thermal path. This means that much more power can be safely dissipated by this resistor, but it relies on this particular layout! Once again, when power dissipation is high, make a note in the schematic so that you don’t forget about the thermal functionality of this short trace.

How to Design the Ideal Automotive PCB Enclosure

Choosing the Best Aerospace PCB Connectors for Your Job

The Most Common Printed Circuit Board Abbreviations and Symbols

How to Prevent Solder Bridging During Manufacturing and Operation