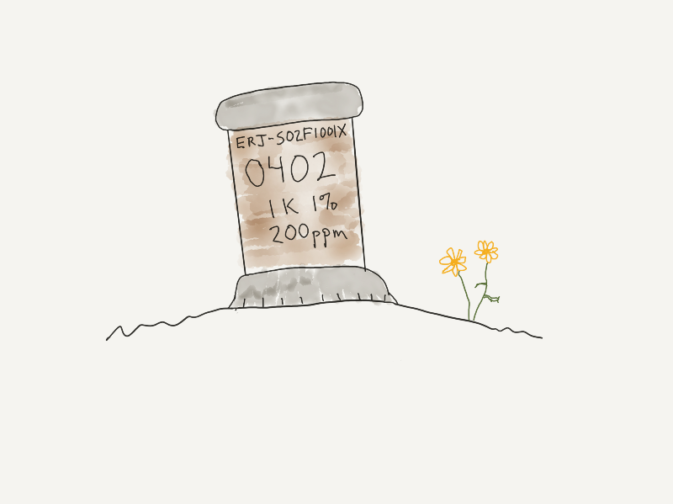 What is a tombstone?

The tombstone effect is a common failure in surface-mount technology. Smaller chip components such as resistors and capacitors suffer the most. They have a small mass, and the surface tension from melted solder has enough force to flip the part up on its end.

What causes the tombstone effect?

The usual suspects for the tombstone effect are:

Who is to blame for tombstones?

Thermal balance and solder dam are design problems that a designer should know about and eliminate during the design process. If the board has these design issues, it can lead to problems with fabrication of the board and manufacturing delays.

Uneven solder paste and placement offset are challenges for the contract manufacturer. The CM needs an accurate pick-and-place machine and a good solder paste process to solve these problems.

The tombstone test board

If we are assigning blame here, it would be good to know which effects are most important! I designed a test board to find out.

The top row of resistors has the IPC-based footprints provided by my friends at SnapEDA. The next row uses the 0201 footprints from the Panasonic library in Altium. The rows below are the same, except that I added copper pours to create an intentional thermal imbalance.

I left out the 2 mil solder dam between the pad of C3 and the via pad. The solder mask keep-outs touch, and the solder dam width goes to zero.

The classic tombstone-look of a flipped-up resistor is not the only failure mode. It is also possible to get a bad connection without visibly flipping the part. To detect possibly-hidden open circuits, I used chains of resistors that I could easily measure. I tried to be clever and make my circuit light the LEDs if the resistor connections are good.

The folks at Tempo Automation built my test boards. I uploaded the Altium pcbdoc file and an Excel BOM, and added a Fab Note, telling the DFM team not to fix my design, and the assemblers not to fix any tombstones! Since Jeff at Tempo was buying, I checked the someone-else-will-pay box.

To try to get some tombstones for-sure, the Tempo crew reprogrammed the solder jet machine to reduce the solder on just one of the two resistor pads. Using 10% steps, they went from 90% all the way down to just 10% of the recommended solder amount. There were still no tombstones, and all the solder joints were good. Amazing!

The word from Tempo is that they do see tombstoning when there is a huge thermal imbalance, such as diodes connected on one side to a large, thick ground plane with just a small trace on the other side. Then, they get 100% tombstones. However, with the relatively minor problems on the test board, they just couldn’t get the resistors to flip up!

I also added vias too close to the pads on C1–5. Without sufficient solder dam, when the paste liquifies it gets sucked into a via.

There needs to be a 2 mil solder dam between the pad of C3 and the via pad. In this case the solder dam width goes to zero. There is still plenty of solder still on the capacitor pad, but it is easy to imagine that of more of the solder could flow into the hole and create a dry solder joint. To ensure that there is enough solder on the pad, use the correct solder dam!

To create the tombstones shown in the picture, the Tempo crew programmed the pick and place to intentionally place the parts off-center. Without this intentional placement offset, the accuracy of the Tempo pick and place machine is sufficient to reliably place 0201 resistors.

Okay, Tempo can load 0201 resistors all day and not make tombstones. How about 01005 resistors? I have been assured that these will be no problem. I intend to find out in my next design.

I’ll continue to make design mistakes here on purpose so that you can learn about them without it costing you delays and board turns. Stay tuned to see if I can become the “Worst PC Layout Designer in the West.”