The Advantages of Antifuse Technology for Aerospace Applications

One of my favorite truisms can be paraphrased as, “there is a thin line between valor and foolhardiness.” Over the years, I have heard adaptations of this phrase expressed in prose, song, and admonition (mostly by my parents or spouse). However, a reliable way to make choices that avoid the foolhardy path is much harder to find. Perhaps, that is where another common saying about living and learning comes into play. Yet, there are times when there is simply not enough time for trial and error. 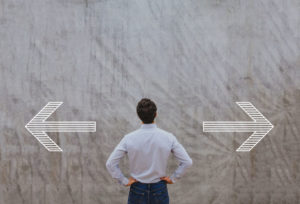 Which way to go?

When designing and manufacturing electronics and PCBs for aerospace applications, the standard trial and error process is inadequate, as the costs of failure are too high. For these systems, safety and dependable operation are at a premium, which requires a reliably optimal PCB development process. This can be challenging, especially when applying new or advanced technology. Antifuse technology presents just such a challenge where the utilization decision is case-specific. Let’s look at when this technology can be advantageous for aerospace applications, but to do so requires that we fully understand how it is implemented.

What is Antifuse Technology?

Equally important to the ability to connect electrical circuits together is the ability to separate or disconnect them in the event of a contingency. For example, when there is excessive current on a trace, that could damage a component or the board. The most common method to provide this protection is probably the installation of fuses along the circuit path that will “blow” or open when the current is too high. Although, effective blown fuses must be replaced before the circuit can be returned to operation. Methods to eliminate this maintenance requirement include better linear and switched-mode power supply regulation design, as inline power fluctuations are a major source of voltage or current spikes, and circuit breakers that can be reset externally.

At first, it may seem counterintuitive, but there are situations where it is undesirable to be able to disconnect circuits on your board. For these cases, antifuse technology provides a reliable option. An example of how this technology is implemented from [1] is shown in the figure below. 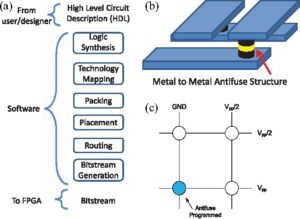 As shown in the figure above, there is typically both a hardware and software aspect to using antifuse technology. Physically, a connection is made between conductors (usually silicon to silicon) that provides a constant electrical path. Antifuse components; such as FPGAs, programmable read-only memory (PROM) and other programmable logic devices (PLDs), are one time programmable (OTP). For these components, programming is performed during manufacturing and is irreversible. This non-volatility prevents unwanted reprogramming. These attributes are particularly attractive in certain aerospace applications.

It is not easy to imagine commercial products where antifuse technology would be an option. This is due to the potential for high development costs. The use of non-volatile components and devices indicates one-time usage. If errors are discovered, the production of a new board or device will likely be required and for complex systems where extensive testing is needed, this can be cost-prohibitive. On the other hand, for military and aerospace missions that are critical and must be carried out irrespective of evolving conditions, the advantages of antifuse technology, listed below, may be well worth the additional costs.

The internal connectivity of antifuse components and networks is practically impossible to break without the destruction of the device, board or component. This makes PCBAs that employ this technology highly reliable. Due to their increased reliability and security, antifuse FPGAs are great for mission-critical space applications in order to perform various functions such as command and data handling, altitude and orbit control, and spacecraft environmental and power controls.

Antifuse technology can protect FPGAs from being reverse engineered since they are OTP (One-Time Programmable) and since they are pre-programmed when shipped to the end-user and they do not have a data/bitstream that can be intercepted.  It is very difficult, virtually impossible, to determine the digital state (0 or 1) of the programmed Antifuse FPGA. Antifuse FPGAs are even more reliable than ASICs.

Antifuse technology packages are almost identical in size to their counterparts that do not employ the technology as the antifuse substrate is smaller than the distance between conductors. And there are no significant power consumption issues, since minimal energy is required to read OTP NVM (OTP NVM (One-Time Programmable Non-Volatile Memory). This energy efficiency makes devices that employ this technology great for battery-powered operation.

Antifuse technology is an advancement that is finding a usage home aboard aerospace and military platforms where reliability and security cannot be compromised. Developing PCBAs that deploy this technology can suffer from excessive cost when excessive respin is needed. Tempo Automation, the industry leader for fast, high-quality and accurate PCBA low-volume production and prototyping, can minimize the probability that unnecessary board build s will be required, thereby lowering your development costs.

If you are ready to have your design manufactured, try our quote tool to upload your CAD and BOM files. If you want more information on antifuse technology, contact us.