The Advantages of Using COTS Components For Electronics in Space

Back in high school, it was a daily ritual for most of the student body to gather in a large open area called the quad and wait for the opening bell indicating it was time to make our way to class. On most days, like the majority of my colleagues, I would be engaged in some conversation about something with a small group of friends. On other days, I would simply scan over the various pockets of students and try vainly to ascertain what particular groups were discussing. As a result of this activity, I gained a clear understanding of the meaning of noise. 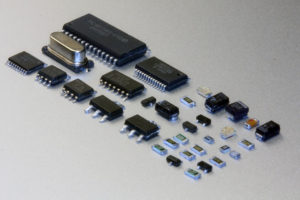 As a result of my choice of careers, I have acquired a more technical interpretation of noise. That is an excess of data or information accompanying and obscuring an electrical signal. In this case, having an excess is certainly undesirable. In other cases; however, it can be an advantageous. For example, a quick search of the internet would lead one to believe that electronic components, many of which transmit, process or receive electrical noise, exist in excess and are readily available. These commercial-off-the-shelf (COTS) components have been traditionally limited for use by the aerospace industry. Today, challenges to this practice are gaining momentum and many feel the use of COTS components, primarily due to their abundance or excess, for electronics in space is one of the keys to more accelerated transitioning from old space development to new and growth of the commercialization of space missions. Let’s explore when and why the use of COTS components in space is advantageous by first gaining a perspective from the traditional approach.

The development of electronics and PCBs for the aerospace industry is a heavily regulated process. This includes a number of regulations and standards that govern PCB manufacturing. One of the most important of these is AS5553 Counterfeit Electrical, Electronic, and Electromechanical (EEE) Parts; Avoidance, Detection, Mitigation, and Disposition. This standard stipulates how to avoid having counterfeit components end up in aerospace systems. This is a major concern and is one of the issues pointed to by traditionalists that favor more restrictive controls over components.

What is today referred to as old space, where development of space ready vehicles and platforms took up to five years or more, is marked by constrained access to space by governments (primarily the U.S. and the former Soviet Union). These constraints permeated all aspects of aerospace systems development, especially what electronics components and PCBs could be used aboard orbitals, such as satellites, and spaceships.

NASA, to ensure the security of the electrical, electronic and electromechanical (EEE) supply chain, developed a database of components that had been or were in the process of being vetted to meet quality, reliability and risk criteria for utilization in aerospace systems. And until recently, only components that were included in the NASA Parts Selection List (NPSL) were used. However, it could take several years for a component to reach the highest and most trusted product assurance classification, Level 1. It was obvious to many that advocate or participate in new space development that a new approach was needed.

When and Why Use COTS Components for Electronics in Space?

An answer to the question of how to best transition from a slower aerospace development process devised for older design and manufacturing technology to a faster more adaptable one is the PCB COTS solution. There is no shortage of justifications for this relaxation of restrictions on components; including the incorporation of advanced, more integrable technology, and size, weight and power consumption (SWaP) improvements. Yet, there must be limitations on when COTS components may be used to maintain supply chain security and ensure acceptable functionality. To help determine when it may be best to use COTS components, let’s take a look at their advantages for common component selection attributes and the considerations that should be weighed.

As shown in the table above, COTS components exhibit advantages for many attributes that impact component selection., which makes them an attractive alternative to the traditional approach. However, there are issues that must be considered and in some cases, COTS components may not be the best or even an available option.

Undoubtedly, the use of COTS components for electronics in space will continue to grow, which places more responsibility for selecting components on the development process for aerospace applications. At Tempo Automation, we procure components from reliable sources that are traceable and have access to accurate stock availability to ensure there are no shortfalls during your board’s development. And as a certified and experienced manufacturer that leads the PCB industry for fast, high-quality manufacturing we will ensure that your boards meet aerospace industry standards.

If you are ready to have your design manufactured, try our quote tool to upload your CAD and BOM files. If you want more information on using COTS for electronics in space systems, contact us.