The value placed on individual craftsmanship and style is high and well deserved. For instance, who would not want an original Renoir or van Gogh hanging over the mantle? However, a much wider group of users is the target of most production today which requires unwavering consistency.

This is true for electronic circuit boards utilized in an ever-growing number of applications across critical industries like aerospace, medical devices, and automotive systems. However, some board assembly processes still rely on work done by hand, which can create uncertainty at this stage of manufacturing. Fortunately, a data-driven and software-based alternative follows an automated PCB assembly process flow chart and can significantly improve quality and reliability.

In addition to fabrication, PCB assembly is one of the primary stages of circuit board manufacturing. And for turnkey board manufacturing, the service includes component procurement. is also included. The PCBA process is likely the most important of the three since it is the last time boards are reviewed, tested, and validated before shipment. That said, working with a CM that performs assembly in-house can be advantageous.

Since the mid-1950s, circuit board assembly has utilized an automated soldering technique with most steps completed by machines and other equipment to improve efficiency. Yet, many CMs continue to rely on engineers, technicians, and others to set the level of quality and reliability for the boards they produce. This level can vary depending on the experience and expertise of personnel on the assembly floor. For example, if key staff happen to be absent on the day your boards are produced, quality may suffer. More importantly, automation can virtually eliminate the possibility of human error as programmed machines can create boards exactly as stipulated in the design data file.

By optimizing the assembly of your PCBs, though, you can leverage the benefits of an automated PCB assembly process.

As humans, one of our greatest strengths is our adaptability. We excel at identifying limitations and constraints and devising ways to overcome them. Automated PCB assembly is a prime example of overcoming the limitations of a manual process.

The PCB assembly process consists of a set of well-defined steps: 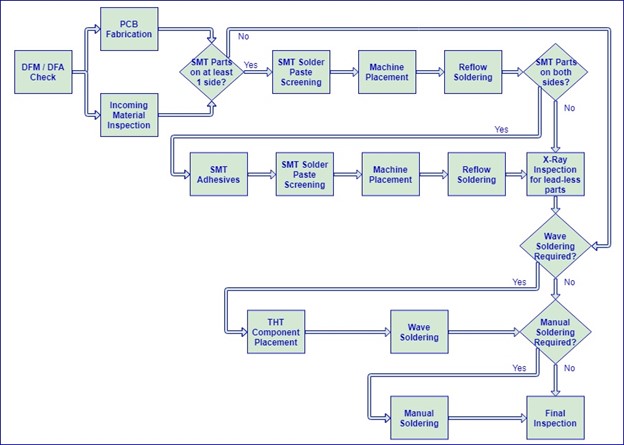 The flowchart outlined above illustrates the basic steps of a PCB assembly process; although, the exact steps and order may vary slightly for different CMs. For advanced CMs, automation dominates the process like an assembly line, where boards move from step to step without the need for human transport and placement. This automation can dramatically improve the speed of assembly and overall quality since each board build is identical.

By utilizing software and digital twins, the automated PCB assembly process can be further enhanced. A digital twin is a predefined image of what the board should look like based on the design file information provided by the developer or designer and can be used to program the PCB assembly process equipment. Therefore, error detection is faster and corrected quickly to save time and costs. This added risk management benefit results in a more efficient process and right first time (RFT) board builds to improve your ROI.

[1] Image from Bittle Electronics at https://www.7pcb.com/PCB-Assembly-Process.php.

Tempo Automation, the industry leader in fast prototyping and on-demand PCBA manufacturing, employs a software-based digital thread process that leverages the advantages of automation to produce the high-quality boards your project deserves.

If you are ready to have your design manufactured, try our quote tool to upload your CAD and BOM files. If you want more information on the PCB assembly process flow chart, contact us.

Choosing the Right PCB Dielectric Material for Your Design

The Best PCB Grounding Techniques for Your Design