The Impact of Autonomous Vehicles (AVs) on the Automotive PCB Market

In 2017, the global automotive PCB market was approximately worth 8.5 billion U.S. dollars according to Polaris Market Research [1]. The same group predicts the market will climb to over 14 billion by the end of 2026. This represents a healthy compound annual growth rate (CAGR) of 6.3%. There are many factors that have led to the current level and will likely keep contributing to continued growth over the next decade. For example, major drivers of growth in the automotive PCB market are the trends toward smaller, lighter, more intelligent devices. Additionally, the continued expansion of electric vehicles (EVs) and autonomous vehicles (AVs) are catalysts for more advanced PCBs. 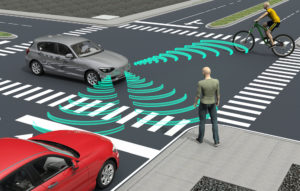 After reaching a low of 32,479 in 2011, the number of fatalities per year attributable to automobiles in the U.S. has shown steady increases reaching 37,461 for 2016 [2]. These high levels are a significant reason for the current accelerated growth in AV development, which in turn has contributed to automotive PCB market growth in advanced driver assistance systems (ADAS) and driverless car safety systems. Explore these subsystems further should help us better understand the current and projected overall impact of AVs on the growth of the automotive PCB market.

Although AVs up to operation level four have been tested on roadways with good results, there is still quite a bit of skepticism over the safety of driverless vehicles. This mistrust of the safety technology of AVs is another factor that drives the development of ever more advanced driver assistance systems (ADAS). ADAS can be viewed as part of the vehicle safety system and include devices designed to improve road and environment awareness by gathering data that is used to automate responses and improve vehicle control and overall safety. The number of ADAS subsystems available vary from vehicle to vehicle but may include the following:

In addition to maintaining a set speed, this feature maintains a safe following distance.

The vehicle is capable of self-parking.

A system to avoid or mitigate the severity of a collision.

This system monitors driver responses and assumes control if driver inattention is determined.

Audible sounds used to warn drivers of nearby EVs which are typically quiet and may not be heard by pedestrians.

Works in conjunction with driver monitoring to assume control for unresponsive drivers.

Assists driver with crossing an intersection and provides warnings of hazards or will stop vehicle absent driver response.

Steering assistance to keep the vehicle centered in the lane.

Active and passive design modifications meant to reduce the severity of injury to pedestrians in the event of a collision.

The vehicle is able to recognize road signs from visual data.

The driver is warned if wrong-way driving is detected.

The above list is of ADAS is not exhaustive and does not include safety systems that have become relatively common for most vehicles like cruise control, anti-lock braking system (ABS), navigation systems using the global positioning system (GPS), blind spot monitoring, tire pressure monitoring, weather monitoring and turning assistance. However, the thrust to improve the technology of AV safety systems does impact automotive PCB development.

Automotive PCBs, especially those that affect vehicle safety, must meet automotive industry standards in order to be utilized in a vehicle. Additionally, there are rigorous testing regimens designed to ensure that PCB components are automotive grade. These regulatory requirements are continually being evaluated and updated as new safety needs are identified, which in turn leads to new ADAS capabilities that require PCB development and result in automotive PCB market growth.

Market growth also comes with the increased installation of ADAS features on vehicles at all autonomous operation levels, although the feature development may be motivated by the thrust of AV manufacturers to achieve a fully autonomous vehicle. As the market expands and ADAS feature development advances more high-performance PCBs that are more complex and more reliable will be required to meet the demand.

Tempo Automation, is the PCB industry leader in quickly producing high-quality, complex boards for prototyping and low-volume production. Our commitment and emphasis on quality are evident not only by our ISO and IPC certifications but also our utilization of advanced software and equipment for pre- and in-process inspections to ensure that your boards meet or exceed automotive industry requirements.

If you are ready to have your design manufactured, try our quote tool to upload your CAD and BOM files. If you want more information on the impact of AVs on the automotive PCB market, contact us.