The Impact of PCB Prototype Iteration Speed on Development Quality

What originally drew me to science, mathematics and later engineering was a desire to understand the wonders of nature. One aspect of nature that baffled me in the early days, and continues to amaze me to this day, is the electromagnetic spectrum, also referred to as the frequency spectrum. A mere change in frequency at our sensors can alter sound or the color of light; the fact that this occurrence is a natural phenomenon still boggles my mind, even though I now have an in-depth understanding of how it occurs. By increasing or decreasing the speed or number of cycles per second (within the visible light spectrum) of a wave, we can generate the light color we desire.

PCB product development may be viewed as a linear process that starts with an idea or set of specifications, proceeds through prototyping and ends with product delivery or deployment. Product enhancements, improvements and revisions notwithstanding, this description can be considered accurate. However, the prototyping stage (where the bulk of development takes place) is not linear, but cyclic, and each cycle that includes board design/build/test is considered a PCB prototype iteration. 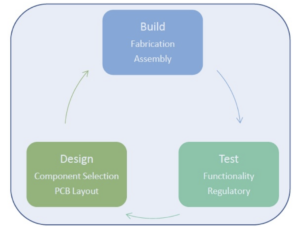 PCB design and functional testing are typically performed in-house allowing you to control the speed at which they are performed. Board fabrication and assembly, in contrast, are usually outsourced to a turnkey contract manufacturer (CM) or fabrication and assembly houses. Your choice of manufacturing service and service provider can have a significant influence over the speed of your PCB prototype iterations. And although not atypical, you may also need to implement circuit board testing during manufacture, which may extend cycle time even further.

The speed of your PCB prototype iterations directly impacts the quality of your product development. These variables are, in fact, proportional to each other, as shown in the graph below. 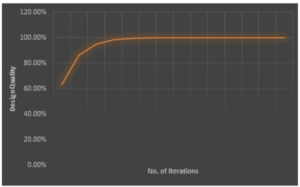 Once the initial design is completed, the speed of your prototype iterations depends, for the most part, on how quickly you receive your boards from your CM. As illustrated in the graph above, development quality continues to improve as the number of PCB prototype iterations increases. The limitation is the amount of available time before product deployment or delivery is due. Meeting this limitation depends upon your choice of board manufacturing service.

In order to create and deliver the best product, you need to design/build/test at a speed that allows you to make the necessary corrections and adjustments to achieve the highest quality design. Doing so requires you to maximize your PCB prototype iteration speed.

Tempo Automation is the industry leader in fast turnkey prototype board manufacturing. We excel at development cycle optimization and to get you started on the best path, we furnish information for your DFM and enable you to easily view and download DRC files. If you’re an Altium user, you can simply add these files to your PCB design software.

If you are ready to have your design manufactured, try our quote tool to upload your CAD and BOM files. If you want more information on PCB prototype iteration or how to optimize your design development cycle, contact us.