The Role of Electronics in Aerospace Systems

Although I think that American football is the greatest sport ever invented, I have never been a fan of fantasy football. I know, if Chris Berman had ever heard that I would probably be banned to a lifetime within the top 10 plays. Nevertheless, I likened fantasy football to those many conquest stories you hear about where a great general outmaneuvers a much larger force and wins an impossible battle. My problem with these is that the guys that really make the outcome are overlooked. I have not seen a quarterback yet that can complete passes without an offensive line and no war has ever been won without the soldiers. 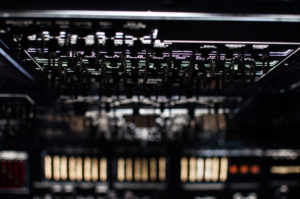 Similarly, when most people watch spacecraft launches, they are usually captivated by the power of the engines and give little thought to the many electronics and PCBs that ensure everything is working correctly. Yet, space vehicles could not get off the ground or much less navigate through space without them. These aerospace PCBs are responsible for everything from propulsion system monitoring and flight control to internal and external communications. Let us take a look at these too often unsung heroes and explore the role of electronics in aerospace systems.

Generally, an aerospace system is intended to travel between planetary bodies, orbit around them or both. Electronics have many responsibilities within satellite systems, as shown in the figure below. 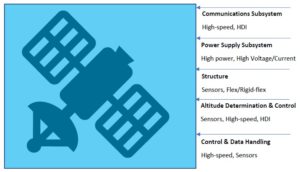 In the figure above, the major subsystems of orbiting satellite technology vehicles are illustrated, along with the most common board types used in the subsystem. For the most part, these electronics and PCBs comprise a command, control and communications (C3) architecture. For example, communications with sensors that measure the satellites structural properties are monitoring systems to provide advance warning of any breakdown. Thus, PCB development for satellites includes high-speed and high density interconnect (HDI)  board design and manufacturing.

It is also necessary to have high power boards to ensure that all subsystem boards receive adequate power for operation and flex boards may be required to mitigate vibration and mechanical stresses. Satellites, for the most part, rely on solar panels as the primary energy source, which means that an efficient power distribution network (PDN) is the major energy electronics function. By contrast, spaceships, as shown in the section below, have more of a power supply system where energy conversion, storage and distribution of high power (voltage and/or current) is needed.

Space vehicles for interplanetary travel or spaceships are similar to satellites in that electronics and PCBs control much of the system’s operations. As shown below, spaceships also contain C3 and flex PCBs; including monitoring of the spaceship’s structural integrity. Specific subsystems for spaceships are shown in the figure below. 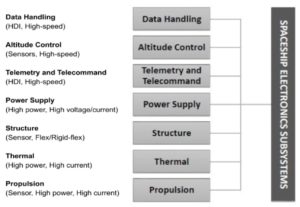 Dissimilar to satellites, thermal considerations are much more important for spaceships. This is due primarily to the high energy requirements for space travel; however, internal temperatures and external temperature swings also demand attention during PCB design and manufacturing. Spaceships also typically use a liquid fuel source. The fuel of choice is liquid oxygen (O2); although, hydrogen peroxide (H2O2) and nitrogen tetroxide (N2O4) are also used. As these liquids require a cold environment and isolation from heat sources within the space vehicle and from external heat, such as from the sun, close monitoring and temperature control are critical electronic systems.

Just as for other advanced technology systems, satellites and spaceships are dependent upon PCBs and electronics for C3, power supply and distribution and structural integrity monitoring. This reliance demands that your design and board manufacturing meet high standards. As CM for top 10 aerospace, defense and satellite producers, Tempo Automation has the expertise and capabilities to ensure that your aerospace electronics PCBs meet or exceed industry requirements.

If you are ready to have your design manufactured, try our quote tool to upload your CAD and BOM files. If you want more information on the role of electronics in aerospace systems, contact us.