In Utopia, which I am told is indeed an actual place, everything works perfectly and never fails. All electronic devices and the circuit boards that drive them last indefinitely, impervious to changing conditions or the effects of time. Although the search for this idyllic place continues, at present, we have to deal with a slightly different situation. That is that our boards and PCBAs are susceptible to failure, especially when confronted with an environment or conditions for which they were not designed and built, and time plays a major role. This reality is why it is important to test our boards and devices before deploying them. 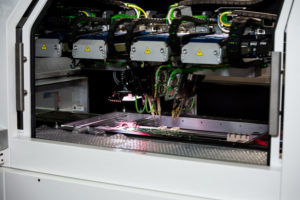 A well-known test for circuit boards is the Flying Probe, which is used to measure the electrical properties of your board along with its electrical connectivity and continuity. In addition to these tests, it is also important to evaluate your board’s structural integrity. For space vehicles, it is even more critical to test your board’s ability to function under mechanical stress and vibratory conditions, just as is done on the spacecraft structure. These evaluations are known as static and fatigue testing and are essential to certify any board or vehicle as space-ready. Let’s define these tests and then see how they are carried out for aerospace platforms.

What Are Static and Fatigue Testing?

Most testing of systems that are comprised of electronic devices and PCBAs is focused on the boards themselves. These evaluations can be classified as manufacturing, regulatory or functionality PCB design tests. And some of these tests; for example, the flying probe test for functionality, require that you design for testability. Although these and other quality control testing provide necessary data to ascertain whether your boards will perform their intended functions, they do not account for environmental conditions.

However, when your boards will be installed in critical systems like industrial, automotive, or aerospace, environmental concerns cannot be ignored. In fact, ensuring that your PCBAs can operate reliability within extreme conditions is a primary issue and testing must be done for it. Within this category, static and fatigue testing, defined below, are two of the most important test types:

Static testing is a type of load test used to analyze the amount of stress and strain that a material or object under evaluation can withstand.

Fatigue testing is performed to determine how long before a material or object will succumb to the effects of exposure to an external condition. This condition may be extreme temperature, external force or pressure.

Now, let’s see how static and fatigue testing are applied to ensure spacecraft boards can withstand their environment.

How Are Static and Fatigue Testing Performed for Spacecraft?

Aerospace systems are unique in that they require the consideration of not only the board but the structure as well. This is due to the fact that the entire platform is subject to experience structural stress and strain. Although both static and fatigue tests are performed on boards and the structure, it is probably best to look at the processes separately, or from the system and board perspectives.

Spacecraft are made in different shapes and sizes depending upon their mission. For example, the largest orbital is the International Space Station (ISS) at approximately 108.5 m (356 ft) x 73 m (240 ft), while a CubeSat may be as small as 10 cm (≅ 4 in) x 10 cm (≅ 4 in). Either the entire unit, a section or a representative sample of the material may be evaluated. For static tests, the structure under test is secured and a load force applied to determine if the sample’s strength meets requirements. For fatigue tests, duration is a factor and the force may be applied repetitively to ascertain how many cycles the structure can endure before failure.

The test procedure for boards is similar to that used for systems. However, a much smaller apparatus can be used. Typically, bare boards are used; instead of PCBAs. Common evaluations are bend tests that measure a board’s rigidity (or conversely, flexibility), and 3 or 4 point load tests.

Additionally, coupons, which are small sections of the fabricated panel that contains the PCB, are typically used that allows for non-destructive (that is no PCBs are sacrificed) or non-invasive testing. Coupons are used for multiple tests and may be designed specifically for a particular test type. As an example, a coupon for static and fatigue testing would likely be a bare board, while an impedance test coupon would contain a surface trace or traces.

Space is a harsh environment. And when designing and building spacecraft its environmental effects must be taken into account. This means that testing of the structure and its internal devices and circuit boards must also be analyzed to ensure they will function reliably. Depending upon the type of testing required, your board design and manufacturing process may need to include special actions to facilitate these essential evaluations.

At Tempo Automation, the leader in fast, high-quality PCB prototyping and low-volume production, we can accommodate your design requirements and build boards and coupons that will enable the necessary testing for your aerospace PCBAs.

If you are ready to have your design manufactured, try our quote tool to upload your CAD and BOM files. If you want more information on static and fatigue testing for space vehicles, contact us.