Andromeda (also known as M31 or NGC 224) is the galaxy nearest to ours, the Milky Way. Even so, it is located about 2.5 million light-years away. That is a long journey, even with the Starship Enterprise from Star Trek, which could reportedly hit 0.73 light years/hr at warp 9.9 [1]. At that rate, a voyage to Andromeda from Earth would take 391 years:

Hopefully, we will be able to use an Einstein-Rosen bridge or wormhole as a shortcut someday and arrive much faster.

Similarly, the standard journey to obtain approval for electronics that will be used in aerospace systems is quite long. The regulatory requirements for the supply chain are extensive and suppliers to the industry have to ensure that all standards are met internally and for outsourced services. Fortunately, there is a shortcut that can help suppliers get their PCBs and electronics products accepted must faster. Unlike wormholes, the aerospace PCB commercial-off-the-shelf (COTS) solution is currently available. Let’s see exactly what this solution is and see how it can be applied to aerospace PCB and electronics development. 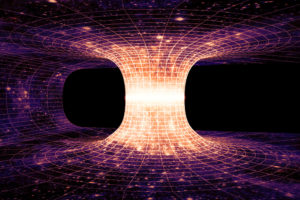 What is the Aerospace PCB Commercial-Off-The-Shelf (COTS) Solution?

Over the decades since we first broke the bounds of our planet’s atmosphere and ventured into space, most aerospace systems have been built and managed by governments. As such, there has been a steadily increasing set of regulations and standards for the design and manufacturing of PCBs deployed in aerospace platforms. Initially, due to shortages of skilled personnel and the infancy of the technology, the development of systems worthy of space flight was slow and measured. Today, however, the older, slower aerospace development cycle, commonly referred to as old space, is being encroached upon by the more commercial, faster new space development.

New space development is focused on getting space platforms ready for launch as soon as possible, whereas old space development was guided by safety and security concerns. This does not mean that regulatory requirements are now being discarded. Quite the contrary. The most important standard for aerospace development, AS9100, which defines the quality management system necessities for vendors that want to supply the industry, has recently been revised and must be adhered to as of September 16, 2018.

One of the major initiatives of the new PCB aerospace development strategy is to reduce the vetting process for new electronic products while ensuring quality, safety and security. The answer to meeting this objective is the aerospace PCB COTS solution. This solution is most pertinent for space platforms that will occupy low earth orbit where environmental conditions are not as harsh as outer space and targets three specific types of PCB elements.

When referring to COTS, most people first think of discrete components. Although this certainly a major aspect, COTS also refers to modules or complete circuits and entire boards.

This includes discrete components, ICs, connectors and other PCB elements.

Modules may be complete circuits, sub-circuits or any multi-component element that can be commercially acquired as a single unit.

These are full pre-fabricated PCBs that can be used as-is or modified to meet specific design requirements.

There is substantial agreement that the time required for platforms and vehicles to be deemed launch-ready should be considerably less than what is typical for old space development. Yet, there is no consensus on specific ways to achieve this. However, there is broad support for exploring the aerospace PCB COTS solution from industry principles, including regulatory agencies like the FAA. The use of COTS as an alternative to the long approval process required by agencies like NASA stems from several advantages, as listed below.

The attributes listed above are more applicable to commercial aerospace platforms such as low earth orbit satellites as opposed to higher altitudes and outer space (beyond the earth’s atmosphere). For outer space platforms, such as inner-planetary vehicles, customized solutions verified by testing are still the best option for most PCB development. For both cases, your ability to meet the quality requirements for aerospace largely depends upon the capabilities of your contract manufacturer (CM).

With the rapid transition to new space development and increasing commercialization of aerospace applications, the aerospace PCB COTS solution becomes ever more attractive as a means to shorten the time to launch for aerospace platforms into low earth orbit while maintaining the quality required.

Tempo Automation is an AS9100D and ISO-9001 certified PCB manufacturer that leads the industry in fast turnkey prototyping and low volume production. To help you get started on the best path, we furnish information for your DFM checks and enable you to easily view and download DRC files. If you’re an Altium user, you can simply add these files to your PCB design software.

If you are ready to have your design manufactured, try our quote tool to upload your CAD and BOM files. If you want more information on the aerospace PCB COTS solution or how to apply it for your design, contact us.

[1] This rate is attributed to Gene Roddenberry, the creator of Star Trek, from his initial draft. http://leethomson.myzen.co.uk/Star_Trek/1_Original_Series/Star_Trek_Pitch.pdf.