It is a safe assumption that most people consider viewing a rocket launch as somewhat of a Kodak moment or an event worth memorializing on film. And for those privileged enough to be present for the first moon landing, the 11th Apollo mission was, quite possibly, a life-affirming moment. Today, rocket launches are not only promoted but also come with a snack, refreshments and a souvenir at the Kennedy Space Center. There is a drawback, of course: the fact that you must view the launch from a safe distance (miles away in most cases) to avoid the ground vibrations of the launch.

The launch is certainly one of the major sources of vibration around space vehicles, and it also affects internal systems, such as electronics and circuit boards. Yet in outer space, beyond the earth’s atmospheric levels, vibrational effects are almost non-existent. To understand this difference and the impact on PCBAs, let’s first define vibration. Then we can take a look at how onboard circuit boards can be affected and what the vibration sources in space vehicles are. 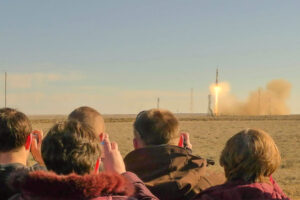 Vibration is one of those words that becomes less applicable [generally] once you try to apply it. For example, acoustics vibration is often associated with the oscillation about a certain frequency that results in a definitive sound. Another interpretation from thermodynamics is that vibration is the translational motion of constituent particles that result in temperature change. To avoid the specificity trap, let’s define vibration as below.

Vibration is the displacement of the particles that comprise an elastic body or fluid away from a state of equilibrium. The source of the vibration is typically external to the system and its magnitude or extent is a determining factor in whether the body returns to its original state or is left in a permanent state of deformation.

How Does Vibration Effect PCBAs?

To understand how vibration can affect a PCBA, it is informative to view the board as a mechanical system with distinct properties that determine how it will respond to stress and strain. These include bending and peel strength. If maximum tolerances for these strength parameters are exceeded, the board may crack or break. Equally important, as it can also negatively impact board operation, is the response of component attachment in the face of vibration. The solder joints of through-hole components and SMDs can be modeled as damped resistors. Depending upon the source, intensity, and solder joint quality, these connections can be severed resulting in erratic operation or non-functionality, which is not acceptable for space vehicles.

Obviously, vibration can be a major problem aboard spacecraft. In fact, if severe enough PCBA operation can be interrupted, halted or the board damaged. Fortunately, there are only three vibration sources to consider for space vehicles, as listed below.

The 3 Vibration Sources in Space Vehicles

The sheer amount of energy necessary to lift and thrust the rocket in space is the primary source of vibration. However, there are also vibrations due to fuel pump action, the engine, and “pogo effects.”

For spacecraft within the earth’s atmosphere, the nominal gravitational pull decreases with ascent. However, force is required to maintain orbit. This introduces vibration sources; such as air turbulence, which are significantly lower than at launch or reentry.

Astronauts usually experience forces of approximately 2-3 G’s on reentry, which is slightly lower during launch. These are of course dampened by the structure, which means the source is higher.

The effects of vibration sources in space vehicles vary with the type of rocket, payload, and mission. Therefore, preflight testing should be done to ensure onboard systems; including electronics and PCBAs are designed and built to withstand these stresses and operate reliably.

Tempo Automation, the leading PCBA manufacturer of high-quality, fast prototypes and low volume production boards, is an experienced and trusted partner by aerospace organizations that are paving the way in space technology. And we will work with you to help you meet the high standards of the aerospace industry.

If you are ready to have your design manufactured, try our quote tool to upload your CAD and BOM files. If you want more information on vibration sources in space vehicles, contact us.