What are the PCB Temperature Limits for Aerospace Electronics Design?

Have you ever watched a rocket launch? Even if your view was from a television broadcast, it is almost impossible not to wonder about the immense amount of force required to launch a rocket. Accompanying this force is intense heat. In fact, engine temperature during a rocket launch is approximately 3,200 °C (5,792 °F). This is far greater than the most common metals used on PCBAs. For example, the melting points of copper, gold, and silver are approximately 1,084 °C, 1,063 °C, and 961 °C, respectively. Obviously, this means boards aboard space vehicles must be protected from these excessive temperatures. 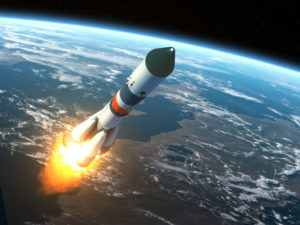 Space is a harsh environment, and it is essential that PCBAs be manufactured to withstand extreme environments. Of the many hardships associated with space (including radiation, pressure, and corrosion), temperature is probably the most significant and difficult to address. This is due to the fact that concerns are not limited to high heat, but also include tremendously low temperatures, as well as the cycling between them. Let’s take a look at the PCB temperature limits for aerospace electronics and how to design boards that will reliably meet their mission requirements in whatever space environment they are utilized.

Although this may seem counterintuitive, when designing and building PCBAs for aerospace platforms, the excessive temperatures during launch are not of primary concern. This issue is addressed by the mechanical design of the platform. The same is true for vehicles that must undergo reentry where the heat generated is a function of the vehicle’s speed. Even so, the temperature for space shuttle reentry, which is relatively slow compared to other rockets, was approximately 1,600 °C (2,900 °F). This is not to say that temperature is not an issue for circuit boards. Indeed it is. However, temperature concerns are different depending on the vehicle’s mission, as discussed below.

Space missions can be separated into two types: flights and orbitals. Space flights are typically round trip exploratory missions; such as the Apollo trips to the moon, that include launch vehicles. Spacecraft on these flights may be subject to various temperature zones as they ascend and descend through the atmospheres of planetary bodies and in outer space. For example, each planet in our solar system has a different surface temperature range.

Launch vehicles are also subject to temperature variations due to motion. For example, to escape the gravitational pull of the earth a launch vehicle must reach a speed of 7.9 km/s (for perspective, this is approximately 20X the speed of sound). Consequently, temperatures near the rocket engine can be greater than 3,000 °C (or nearly 6,000 °F). Designing launch vehicles for these environments requires equipping them with control systems to mitigate the effects of these extreme temperatures, just as is done for satellites that orbit the Earth.

Orbitals or satellites are also subject to temperature limits that may range from intensely hot to quite cold. The range of temperatures that satellites must withstand is determined by the layer of the earth’s atmosphere in which it is deployed. Typically, these are the exosphere, ionosphere, and thermosphere.

Obviously, there are temperature concerns whether you are developing boards for space flight vehicles or satellites. In most cases, but not all, PCBAs are not directly exposed to the extreme temperature ranges of the atmosphere. Nevertheless, these temperatures if not mitigated would affect the vehicle’s internal environment. Therefore, it is necessary for aerospace vehicles to include a temperature control system (TCS). The TCS monitors the internal environment for personnel cabins, cargo areas, and other areas of the space vehicle and adjusts the heating or cooling as required to maintain an ambient temperature. The effectiveness of TCSs can vary a great deal depending upon a number of factors, including sophistication, mission, and cost, and should not be solely relied upon in the event of temperature extremes or cycling. Instead, to support these systems and ensure your board’s reliability, you should design for the PCB temperature limits that may be present themselves.

Temperature considerations for PCBA design begin with thermal design for manufacturing, which includes making material selections based on the coefficient of thermal expansion (CTE), choosing adequate copper weights and thermal reliefs and placing components to aid with thermal dissipation and distribution. In addition to these actions, which should be guided by the actual PCB temperature limits your board is likely to encounter based on space vehicle type, mission, and environment, you should perform the following:

Component selection is one of the most important decisions for aerospace board design. It is imperative that your supply chain is traceable, as stipulated in AS9100, and components meet their documented thermal performance objectives.

It is important that you not only select components that meet your thermal requirements, but that you also verify their performance for the operation environment. This may require having special testing performed; such as Destructive Physical Analysis (DPA) on new unproven components, as in most cases, board failures cannot be repaired or replaced once deployed.

It is highly likely that your boards will be subject to repeated thermal cycling. For satellites, which stay in orbit for years, selecting materials that can withstand daily temperature swings must be a primary design objective.

In order to make sure boards meet all of the many aerospace standards, including AS9100D requirements for quality control, it is imperative that you partner with an experienced and certified aerospace CM.

Designing and manufacturing PCBAs for space requires that you know the PCB temperature limits for the environment in which your boards will be deployed. Based on this, you need to institute design actions your space vehicle’s location or path.

At Tempo Automation, we specialize in building high-quality PCBAs faster than anyone in the industry to meet aerospace standards and will work with you throughout development to ensure that your boards meet your objectives.

If you are ready to have your design manufactured, try our quote tool to upload your CAD and BOM files. If you want more information on PCB temperature limits, contact us.