What is the Impact of Skin Effect on PCBAs?

One of my favorite Christmas stories is the one about Rudolph the Red-Nosed Reindeer and his band of misfits. Not to give too much away, but the misfits end up saving Christmas, which is great! My favorite part of the story, however, is when Hermey, the elf who actually wanted to be a dentist, was singing the song, “Put One Foot in Front of the Other.” The point was that all journeys, regardless of how arduous, begin with a single step. I like to refer to this as focusing on the path, which will eventually guide you to the destination. 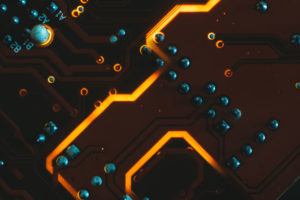 Focusing on the path

Paying attention to the path or circuit board traces is also necessary for PCBA development. In fact, your board’s copper traces should be designed and fabricated to optimize current flow for the best board performance. This can only be achieved by recognizing the importance of trace parameters; such as length, width, and impedance on signal integrity. It is also important to understand electromagnetic phenomena like the skin effect and how it impacts your ability to arrive at the desired destination, a well-designed and manufactured PCBA.

What is the Skin Effect?

To understand the skin effect, which succinctly can be expressed as the tendency for current to flow near the surface of a conductor at higher frequencies, a brief review of the relationship between current and impedance is probably in order.

Eq. (1), above, is a form of Ohm’s Law that shows the inverse proportionality between the amount of current flowing through an electrical device and the resistance of that device. This relationship also applies to copper traces as they are also electrical devices. If we extend Eq. (1) to such that it applies to AC signals it becomes Eq. (2).

In Eq. (2), resistance is replaced by impedance to allow for the influence that reactance has on current magnitude and phase. Note that current and voltage are phasors and DC signals are differentiated from AC by having an angle of 0°. Now, inductive and capacitive reactances have quite different effects on current flow for AC signals. As frequency increases, inductive reactance increases thereby raising the overall impedance to current. The opposite is true for capacitive reactance. As frequency increases, impedance to current flow is reduced.

The Impact of Skin Effect on PCBA Design and Manufacturing

When the skin effect occurs, the effective resistance of the copper traces on your board will increase due to a reduction in the available cross-sectional area for current flow. To understand how this phenomenon impacts the design and manufacturing of your circuit boards requires that we quantify it. Practically, that means defining how far from the surface current flows in a conductor or skin depth. Mathematically, the skin depth is given by Eq. (3), below.

In the equation above,

From Eq. (3), we see that as the frequency increases, the skin depth gets smaller or the distance away from the conductor surface that current flows decreases. It can also be seen that for DC (frequency is zero), we have maximum skin depth.

Understanding the skin effect and how to determine its impact, skin depth, is very important for your board design and manufacturing as shown below.

When selecting materials for high-speed or high-frequency applications, it is important to consider properties such as dielectric strength and copper roughness as these impact impedance and current flow.

Width, copper thickness, length of routes and clearances are all factors that determine the layout of your traces. At higher frequencies, to ensure that your design and board manufacture meets your operational objectives, you have to consider layout restrictions. Specifically, EMI sources; such as stray capacitance, as more current flows near the surface of a conductor.

The skin effect can be a significant issue that affects how you design your PCBA and how it is manufactured. To learn more about how best to design PCBAs for high-speed applications, see DFM for High Speed Digital PCBs.

Understanding the many issues that impact designing and manufacturing high-speed boards is critical to producing PCBAs that will meet their operational requirements, reliably. At Tempo Automation, we lead the industry in building high-quality boards quickly that successfully address the many issues that affect high-speed applications.