What is the Parasitic Capacitance Effect?

The longer you work in industry and are distanced from academia, the easier it can be to forget some of the basics that you learned. This is especially true if you do not apply them regularly. For example, virtually all circuit elements can be modeled in terms of their impedance (or, if you prefer the converse, admittance). Just as a reminder, in equation form, that is:

and it is common to forget that most elements have some resistance (or conductance) and reactance (or susceptance), even if it can be neglected for some analyses.

On circuit boards, resistance and reactance, which can be either predominantly inductive or capacitive, can show up in unwanted places. These are referred to as parasitics. And unfortunately, some parasitics cannot be neglected as they can impact your board’s operation. Let’s take a look at parasitics and then focus on the parasitic capacitance effect, which can wreak some havoc on board signal integrity in various ways, and devise design techniques by which they can be mitigated. 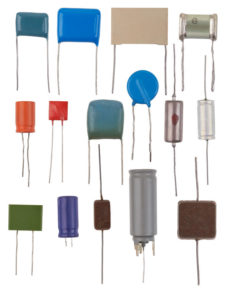 What Are Circuit Board Parasitics?

Parasitics, as they exist on circuit boards, are not physical elements and they can generally be defined as follows:

Circuit board parasitics are unwanted intrinsic electrical elements that are created on circuit boards by virtue of their proximity to actual circuit elements. These intrinsic elements may exist along or between any conductive elements (e.g. along traces or between adjacent component pins). These parasitics are part of the reason for the less than ideal electrical behavior of circuit elements.

Circuit board parasitics are similar to other parasites in that they drain vitals that are needed for optimal performance. In addition to parasitics between conducting elements, all circuit board components have parasitics associated with them. And these may be resistive, inductive and capacitive.

Parasitic resistance will exist in series along traces or as a shunt between conductive elements.

Parasitic inductance will exist along a wire or trace and exhibits the same behavior as an actual inductor, which is storing and dissipating of electrical energy.

Parasitic capacitance will exist when two nearby conductive elements are at or possess different charge levels.

Although parasitics are undesirable, in many cases, their effects are negligible and do not pose any major threat to circuit operation. But, not always. In fact, parasitic capacitance can have a significant impact on board operation.

When two conductive elements on a PCBA are close to each other and at different voltage levels they form an intrinsic and typically unwanted capacitor. This is known as the parasitic capacitive effect. The two elements may be two-component pins, two traces, a pad and a trace, a pad, and a pin, or any other two conductive elements on the board. As the intrinsic capacitor plates have a charge differential there is an opportunity for current flow. Now, current does not flow through the capacitor. Instead; an electrical charge differential is accumulated between the plates. As this charge differential increases, a corresponding decrease in electron flow is available for the desired signal path that negatively impacts signal integrity.

To learn more about these methods, see How to Mitigate PCB Stray Capacitance Effects.

Parasitic capacitance is unavoidable as it is a consequence of the conductive elements that populate PCBAs. At Tempo Automation, our engineers are experts on these types of circuit board issues and we can assist you in making the best choices to minimize parasitic capacitance effects and ensure that your boards are built quickly and to the highest quality.

If you are ready to have your design manufactured, try our quote tool to upload your CAD and BOM files. If you want more information on the parasitic capacitance effect and how to mitigate its effects, contact us.