To mark 150 years of organization of the known elements into a systematic readable structure, the United Nations has officially proclaimed 2019 as the International Year of the Periodic Table of Chemical Elements (IYPT2019). For many, the Periodic Table is simply relegated to something you had to learn to get through Chemistry class. However, the table is dynamic and continually adds members that are or will become the materials that comprise everything we make and use. Today, the number has reached 118, which includes both naturally occurring and synthetic elements, yet some of the most impactful are still those that were discovered in ancient times, such as copper (Cu). 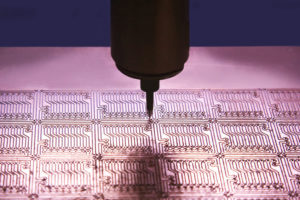 Arguably, copper remains the most important element for circuit boards. Even though many parts are now made of plastics, the circuitry that connects them is invariably copper. This includes the surface traces and drilled holes for current or vias. Surface traces and vias do perform a similar function: carrying current. However, traces run between components, connectors and/or vias, while vias themselves route current perpendicularly from the board surfaces to internal layers, signal layers and/or ground planes, or between the internal layers and often run beneath components, such as for BGAs.

Traces and vias differ in other ways as well. For example, surface traces are typically flat and rectangular and may include turns to run around other surface elements. Vias, on the other hand, are usually round and have a direct path. Additionally, both may be plated. For traces, the PCB plating process is done to protect the copper, while for vias, the objective is to create the path for current through the board. Let’s look at how the copper plating process is done, which should aid you in making the best choice for your PCB.

How Copper Plating is Done for PCBs?

Vias, are sometimes referred to as plated through holes (PTHs). This definition may serve as a general one to associate the vertical (z-direction with respect to the board surfaces lying in the x-y plane) current paths of a PCB to the drilling of the holes through which the current flows. However, it must be qualified as all vias are not constructed the same. This is illustrated by the figure below.

As shown above, there are several types from which the best via option for your design must be chosen. Clearly, this decision is based upon your board’s stackup. However, it should also include input about the copper plating process and collaboration with your contract manufacturer (CM) as elaborated upon below.

Making the Best PCB Copper Plating Process for Your Board

Typically, electroless or electroplating is employed to create vias or PTHs. Electroless plating does not require electricity; however, a catalyst is required for deposition. Electroplating, on the other hand, uses electrolysis where a DC current dissolves a copper rod and the copper is then distributed on the surface. When performing copper plating fill type is a major issue. If non-conductive fill (primarily epoxy) is used, as is done for via-in-pad, the thermal conductivity is only 0.25 W/(m-K), for conductive pastes a slighter higher rate of up to 15 W/(m-K) is available, while for electroplated copper 250 W/(m-K) is achievable. Other attributes, such as drill hole aspect ratio, wall thickness, and even board material properties are important as they can impact reliability. These and other plating process attributes are listed below.

For metallic, typically aluminum, core boards, vias are constructed differently than for other material boards. Holes are drilled through the core and then backfilled with a dielectric material. After lamination of the board’s stackup, the vias are drilled and copper-plated normally.

The list above includes some of the most important attributes that impact the PCB copper plating process, which should be considered. For additional support on the variances between attributes for copper plating, refer to:

Although not a mandated regulatory standard, this document does provide detailed and helpful information and data that can be utilized, along with your CM’s expertise to make the best choice for your design.

As explained above, choosing the best via option for your design includes consideration of the copper plating process. At Tempo, we can build your boards to meet any design intent and provide you with options for any type of via fill.

If you are ready to have your design manufactured, try our quote tool to upload your CAD and BOM files. If you want more information on the PCB copper plating process or how to make the best choice for your design, contact us.