The Need for Advanced Semiconductor Manufacturing

Advances in semiconductor manufacturing have precipitated innovations in a wide range of applications. From smartphones to satellites, complex integrated circuits connect the physical and digital worlds. This explosion of semiconductor usage requires novel manufacturing techniques to keep up with demand.

One such technique is extreme ultraviolet (EUV) lithography. EUV lithography uses EUV light of just 13.5nm wavelength to produce fine patterned thin films for semiconductor manufacturing. This technology allows semiconductor companies to develop many advanced chips that are the backbone of products we enjoy today.

EUV Tech Develops the Next Generation of Extreme Ultraviolet Equipment

Since 1997, EUV Tech has been the global leader in production of at-wavelength EUV metrology tools. EUV Tech’s broad range of equipment includes EUV Reflectometers, EUV Pellicle Transmission Tools, and EUV Accelerated Exposure tools. These tools can be found on the production lines of the world’s leading semiconductor manufacturers.

Habid Rascon-Ramos, an electrical engineer at EUV Tech, designs PCBs for electrical subsystems within many of EUV Tech’s products. Working on a tight schedule for the latest Reflectometers and Accelerated Exposure Tools, every new design had to be quickly assembled, tested, and re-worked before it could be integrated into the new equipment.

“Having quickturn, precise assembly of my board designs and the ability to make changes fast was crucial,” said Habid. “More customers than ever are requesting EUV equipment, so I needed an efficient, streamlined process.” 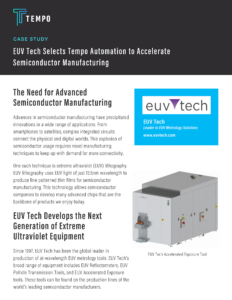 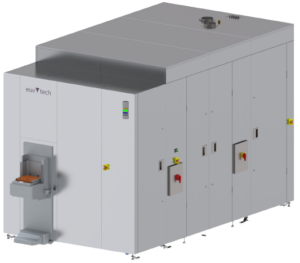 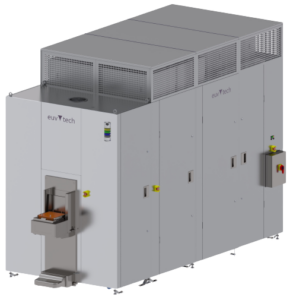 Being well versed in speed and precision, Tempo established itself as the ideal CM for EUV Tech’s next generation of metrology tools. Tempo’s software-accelerated manufacturing assembles high-quality PCBAs quickly, enabling engineers to spend their time innovating. Our connected smart factory leverages data at every step and ensures final boards maintain design intent. We remove the need for a golden board, saving engineers time and simplifying the manufacturing process.

“I decided to partner with Tempo Automation because they could assemble high-quality boards in a fast-paced manner,” said Habid. “Tempo provided the best opportunity to quickly iterate on each design while staying on schedule.”

Tempo provided EUV Tech quotes for each design in 1-2 days, while working with them to understand the design requirements of their boards. Our streamlined process provided fast turnaround on prototypes and boards were manufactured exactly as intended. This allowed Habid to focus on iterating improvements to his design in order to better fit the end product. With each iteration, Tempo quickly assembled the boards so Habid could test his new design.

Tempo easily scaled to manufacturing once the final design was established, producing larger board quantities that were integrated into the end products. Overall, Tempo shaved off 3-4 weeks of time for each board design and saved EUV Tech $500 - $1,000 per board.

Chami Perera, Chief Operating Officer, was thoroughly impressed with Tempo from prototyping through production. He stated,  “The speed and quality from Tempo have been game-changers for us. We have been able to scale up our operations without having to rely on hiring more technicians to solder boards.”

Today, many of EUV Tech’s products have shipped to customers with boards built by Tempo. This includes upgraded versions of EUV Tech’s EUV Reflectometer and EUV Accelerated Exposure Tool. In 2022, EUV Tech will partner with Tempo Automation to help produce the company’s EUV N&K Measurement Tool.

“Partnering with Tempo Automation has propelled us to new levels of efficiency, allowing us to more effectively iterate throughout the product development cycle to rapidly build high-quality tools,” said Chami. “I've had a great overall experience with Tempo Automation, their customer service has been excellent, and the quality of the boards I receive is top-notch, even with the fast turnaround time.”