In the summer of 2017, engineers in the Fine Flow Service department of Hitachi Metals were looking for a new PCB contract manufacturer. As a leading supplier of customized mass flow controllers to the semiconductor industry, Hitachi Metals has major OEM clients in the U.S. who demand quick turnaround for prototypes. “All our clients want better accuracy, better performance, better reliability,” stressed William Higgins, Product Development Engineer at Hitachi Metals. “They’re always driving to receive better prototypes and pay less money.”

Higgins and Senior Electrical Engineer Gerald Eberhardt are part of a Research and Development team whose ability to meet their clients’ needs depends on their ability to get prototypes back from manufacturers quickly. Each project these engineers work on is unique and highly specialized, and their workflow demands quick turnaround in order to implement timely solutions.

Unfortunately, their recent CMs were not meeting this requirement. Through his 20+ years in the industry, Eberhardt has “had a lot of adventures dealing with sub-par contractors," and they were at a point where that wasn’t an option. Hitachi Metals needed to find a manufacturer that could deliver quality PCBs at the speed of their design.

The Search for the Right CM

Attempting to solve their CM problem, Hitachi Metals searched both domestically and internationally for a PCB manufacturer that could deliver for them. One CM that the engineers at Hitachi Metals worked with for prototypes took several weeks to deliver PCBs. Quotes from this manufacturer typically took a full week, and then there was a four- to six-week lead time for assembly. This company also charged extra to have a DFM report done. Hitachi Metals tried another small-volume CM for fabrication who took three to five days just to fabricate the raw boards. This, coupled with the time to source and acquire components—including a couple of days for shipping them, then four to six days to manually place them—was significantly slowing the product development process. 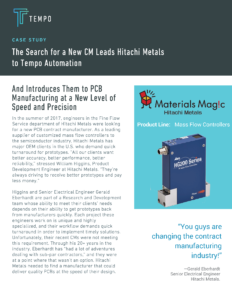 “You guys are changing the contract manufacturing industry!"

Tempo Automation immediately distinguished themselves from other CMs by supplying HitachiMetals with DRC files that allowed them to institute DFM guidelines into their PCB design software that ensured their design complied with Tempo’s equipment. By applying these Tempo DFM best practices, a designer can greatly reduce or eliminate the need for back-and-forth between designer and manufacturer to verify that the design is manufacturable, thus speeding up the process even further. The next step in Tempo’s turnkey manufacturing approach is submitting designs via a proprietary quoting tool that uses a patented process to review and validate customers’ BOM and native CAD files prior to initiating the manufacturing process. In order to comply with Hitachi Metals’ company IP policy of not disseminating original design files, Tempo allowed them instead to provide design files in ODB++ format, moving the quote and manufacturing process seamlessly forward while still remaining compliant.

The Hitachi Metals engineers were amazed at how quickly they received their quote, which only took a couple of hours. Not only was it much quicker than the week some previous CMs took, but it required much less work and provided complete verification of the BOM. Components that were in stock were validated as being available, confirming that the manufacturing schedule the quote presented would be attainable. And the entire manufacturing process, including delivery of the assembled boards, was completed in four or five days. This was a vast improvement over prior CMs, as it would sometimes take Hitachi Metals that long just to receive raw cards from other suppliers.

Not only were Hitachi Metals’ engineers impressed with the speed with which Tempo was able to deliver the PCBs to them, but they were “floored” with the overall smoothness of the entire process. Eberhardt explained how in the past, the process of moving a PCB from design to a fabricated and assembled board could involve the design engineers working with a fabrication shop to get the raw boards, creating a BOM, coordinating with a parts supplier and checking the parts for accuracy—which required a week internally, all before the board could be tested. In contrast, Tempo’s turnkey process handled all these steps for them in a few days.

Equally impressive to Eberhardt and the Hitachi Metals team was the high quality of the PCBs Tempo produced, which he described as “Top notch!”—an opinion that was not arrived at lightly. Based upon previous CM relationships, Eberhardt initially tested all of the boards received from Tempo. However, after individually inspecting the first 90 PCBs and finding no assembly errors on any of them, he has since abandoned that practice, confident that he can rely on Tempo to consistently produce high-quality boards.

The decision to employ Tempo’s software-driven connected factory for turnkey PCB manufacturing has benefited Hitachi Metals in several ways, and the partnership has grown from that initial run to include four more orders to date. This seamless and predictable process with Tempo has improved relationships with their customers as well. Being able to receive boards in four or five days—as opposed to weeks with previous CMs—puts Hitachi Metals way ahead of requests from customers. In addition to being able to meet request dates, their engineers are confident that the PCBs Tempo delivers are high quality and reliable. As Higgins put it, “As long as we design it right, we know it is going to work right.” Additionally, Tempo, which specializes in prototype and low-volume PCB manufacturing, helped them transfer their designs seamlessly from prototyping to production, even introducing Hitachi Metals to their current partner for high-volume PCB manufacturing.

Tempo Automation has proven to be the solution to Hitachi Metals’ CM problem, and they highly recommend Tempo for anyone needing fast, accurate and reliable boards. After hearing of Tempo’s plans to improve its process by adding additional automation, Higgins remarked, “This is already so good—I do not see how it could be improved.”