Spire, Inc., approaches personal health monitoring devices from an innovative and integrated perspective. By monitoring your respiratory patterns (which provide insights into your state of mind) and providing real-time feedback to the user’s mobile device, Spire encourages an increased mindfulness surrounding our health.

The company’s first product, the Spire Stone (which discreetly clips inside the waistband), has met with success since its 2015 launch. But the San Francisco-based startup keeps innovating—they’re planning to disrupt the activity tracker market further, with a completely revolutionary approach to wearable technology.

This new innovation, the Spire Health Tag, is intended to be permanently affixed inside the user’s clothing. Sold in multiple packs, a user’s activewear, undergarments, and sleepwear can be tagged—without any ongoing charging or additional upkeep necessary. Their research showed that each tag had to be able to withstand up to 18 months’ worth of continuous flexing, sweating, washing—and still function. Spire needed their design to be flexible, reliable and of course, miniature. All indications pointed to multiple iterations being necessary before homing in on the final hardware design.

As time was critical to prevent unnecessary and potentially costly delays in the product’s launch, they needed a PCB manufacturer that could respond to their design changes quickly. As Dylan Jackson, the Lead Embedded Engineer at Spire put it, “Our schedule was aggressive. We needed a way to quickly manufacture and test the hardware. Any time spent waiting on PCBs to arrive is time wasted.” Spire needed a partner that could do quick turnaround for prototypes. 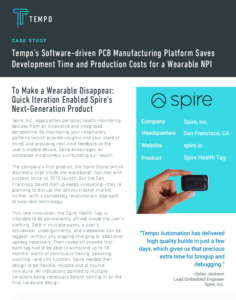 "Tempo Automation has delivered high quality builds in just a few days, which gives us that precious extra time for bringup and debugging." 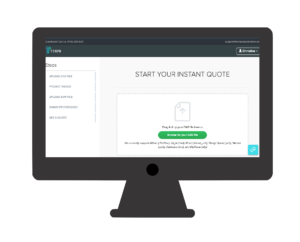 “Tempo’s turn times allowed us to iterate quickly enough to prove or disprove all our assumptions before production."

Tempo Automation is an industry leader in providing fast turnaround turnkey PCB manufacturing. Tempo’s focus when partnering with clients is to meet their PCB prototyping deadlines and provide the smoothest and most cost-effective transition to production. This includes assisting the client with DFM and offering full turnkey fabrication and assembly using software-driven state-of-the-art facilities, automation and advanced custom software tools.

Although location and referrals were two significant factors that drew Spire’s attention, the most important consideration was Tempo’s ability to deliver PCBs quickly. “When I’m prototyping and developing on tight timelines, waiting one-to-two weeks for assembled PCBs can really negatively impact our schedule,” stated Jackson.

The standout capability of Tempo’s software for engineers is their real-time quoting tool, which prepares fast and fully transparent quotes. The Tempo quoting platform pairs BOM validation—a process that inspects and analyzes the components list for manufacturer part number (MPN) errors, component duplicity and availability—with a patented methodology for parsing native CAD files to accurately interpret design intent. By helping designers resolve any BOM issues and by showing in real-time how design decisions affect lead time and cost prior to manufacture, the Tempo quoting tool enables a designer to stay on-budget and on-schedule.

In addition to the time savings of using Tempo’s online platform, Spire received excellent DFM feedback that had a significant impact on not only their prototype designs, but also on future high volume production challenges. “Tempo’s turn times allowed us to iterate quickly enough to prove or disprove all our assumptions before production—which as it turned out was a blessing, as some of our first assumptions were a little misguided,” stated Jackson. Based on the development board testing that Tempo enabled, Spire ultimately chose (and found success with) a different architecture than originally planned.

For Spire’s Health Tag, Tempo was brought in while design was still underway—Spire felt Tempo’s fast turnaround would help them complete this phase sooner. As they began to work with Tempo’s DFM engineers, they were impressed with their design expertise, and began to rely on them as a technical resource for their overall prototyping process. Major redesigns required new boards every one-to-two months, and Tempo consistently and quickly incorporated the changes and delivered the boards. Impressed with the reliable turnaround, Jackson commented, “Tempo Automation has delivered high quality builds in just a few days, which gives us that precious extra time for bringup and debugging.”

The most significant PCB redesign Spire enacted was a component package change from a ball grid array (BGA) package to chip scale packaging (CSP). The new package required a 0.35mm pitch which introduced via issues that needed to be resolved in the current design. Tempo’s engineers were able to provide Spire with insight on the various types of vias, their advantages and disadvantages and helped them make the best decision for their product in terms of manufacturability and cost. “Blind micro vias presented a lot of manufacturing challenges. However, Tempo provided advice on the cost implications of going with via-in-pad with or without fill, that we could pass on to the production CM. Working through design challenges like these with an offshore CM could mean 1 to 2 days lost for each issue,” recounted Jackson.

Throughout the product development phase, which lasted just under a year and included eight separate PCBA and rework orders, Tempo consistently worked to help iron out the issues that arose as the design was being finalized, delivering new boards to Spire quickly to keep pace with an aggressive testing cadence. During that time, the relationship developed into a true partnership. Tempo not only helped them overcome their design challenges and meet their launch date deadline, but worked with Spire on how to design their boards with a focus on manufacturing. And not just for the Health Tag—the education in DFM Tempo provided will assist Spire’s engineers in decreasing turnaround time and cutting overhead on future product development projects as well. Summarizing the overall process and relationship with Tempo, Jackson stressed, “They became a technical resource we could trust. More than just board makers.”

And when the Spire engineers had issues with a test board in the final two weeks of the development phase, with Tempo at hand they could confidently go through a full design process, without being rushed. For Spire, Tempo turn times meant their project could be driven by design—not by manufacturing.

Spire announced pre-orders of their Health Tag in November 2017—on schedule—and their product will ship to consumers March 2018. Although Spire had unique issues for which they needed unique solutions, the level of commitment and dedication exhibited by Tempo was its standard service. The team at Tempo believes unimaginable breakthroughs are possible when ideas can be explored by cycling rapidly between conception and realization—and it’s what they strive to make possible every day for their customers.

The company is setting a new tempo for progress in electronics development by enabling engineers to explore and realize ideas faster than ever. By improving manufacturing to meet the demands of innovation, Tempo Automation is helping engineers like Dylan Jackson and the team at Spire spend more of their time creating tomorrow’s products, and less time waiting on builds.