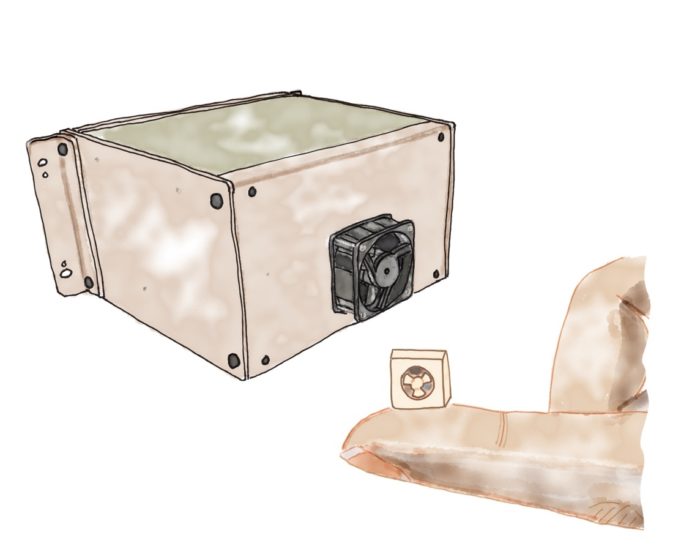 Many electronic products rely on cooling fans, with sizes varying from 10″ blowers to 8 mm micro-fans. A few thermal design equations can narrow down the selection options. Early system prototypes can help refine fan selection. The complexity of airflow means that choosing the right fan may require trial and error. A best practice is to start the thermal design early in electronics prototyping.

Fans move air by creating a pressure differential. If the air is blocked, pressure builds up and no air moves. If the fan is out in the open, there is no pressure across the fan, and airflow is maximized. The operating point is somewhere between these extremes. 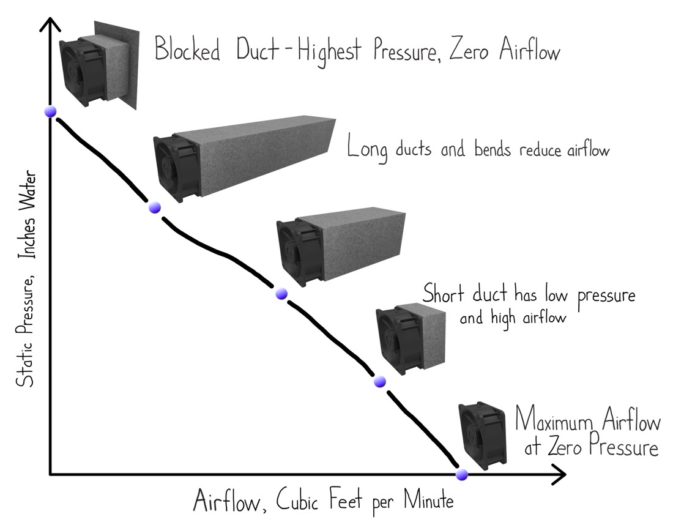 Many fan datasheets only specify the static zero-flow pressure and the maximum free airflow in cubic feet per minute, or CFM. For these fans, a straight line between these two intercepts approximates the pressure versus airflow relationship. 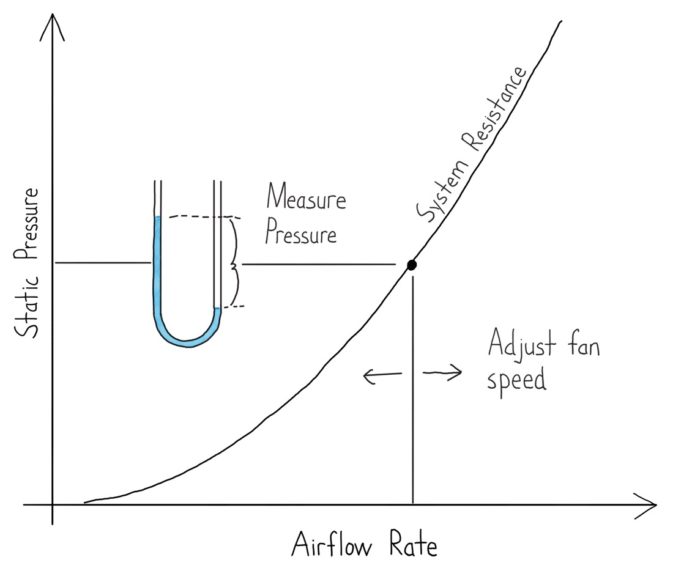 DC fan speed is easy to adjust by changing the DC voltage. As the airflow rate changes with fan speed, the pressure changes. This pressure can be read with a water manometer, which is such a common measurement that fan pressure is almost always specified in inches of water at standard conditions. These units for fan pressure are called “in. wg” or “in. H2O”. 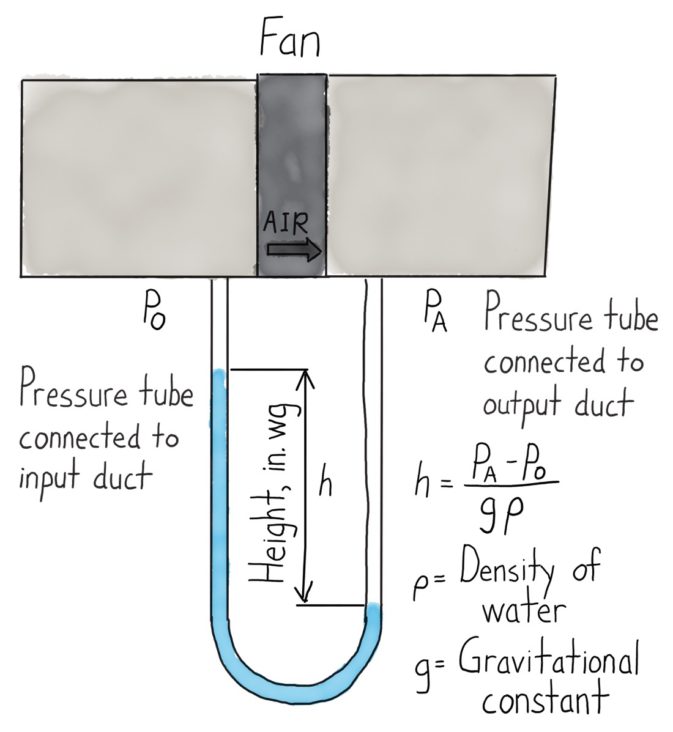 As part of the prototyping process, fit a tube to the electronic package near the fan and run it to a manometer to get a reading of the pressure in the enclosure. Use a DC fan with a tachometer output. This will enable measurement of the system air resistance. Airflow rate is close to being directly proportional to fan RPM, which is read with the tachometer. Measuring pressure and airflow enables measurement of the air resistance, which is otherwise difficult to predict.

The operating point for a fan is the intersection point between the fan performance curve and the resistance of the enclosure. 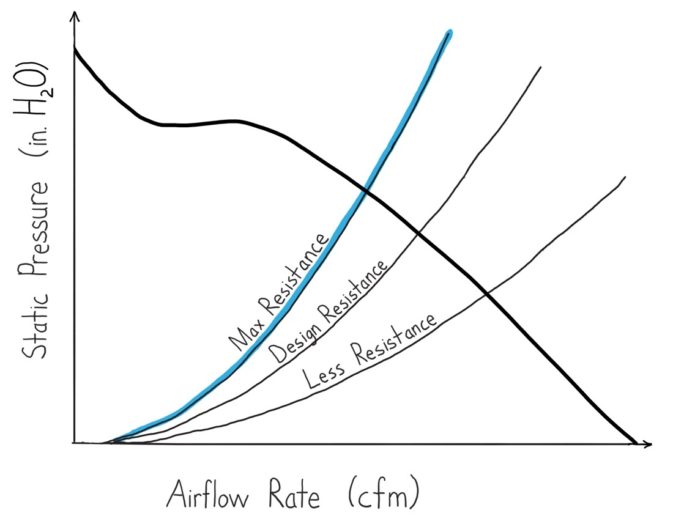 The resistance curves show that as the system resistance increases, there will be less airflow. Resistance will eventually increase due to dust, blockage, or design changes, and it is good to have some margin. When fans are operated at high resistance, it is not unusual to find a region of the fan curve with a negative slope. 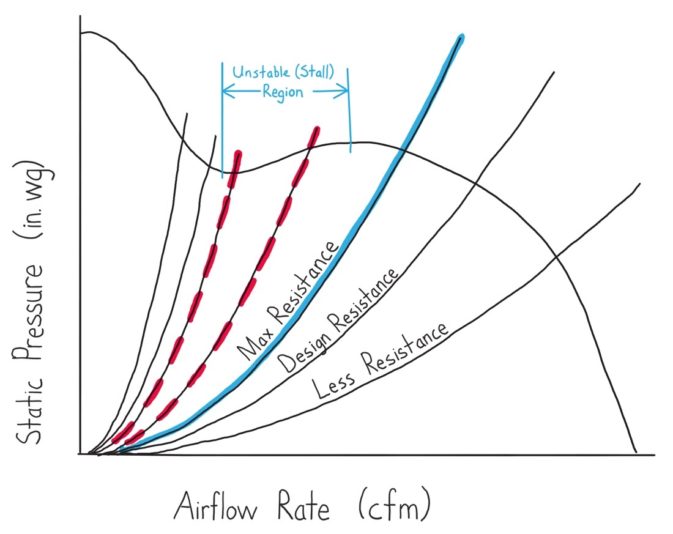 In this unstable “stall” region, the fan makes an annoying surging noise. Operating in the stall region causes extra fan wear and can lead to early failure. The solution is to avoid this region. Use a higher pressure fan or lower the air resistance.

Move Heat from Hot to Cold

The goal of the fan is to remove heat from the enclosure. Once the airflow rate is known, the amount of heat that can be removed can be calculated from the basic heat transfer equation: 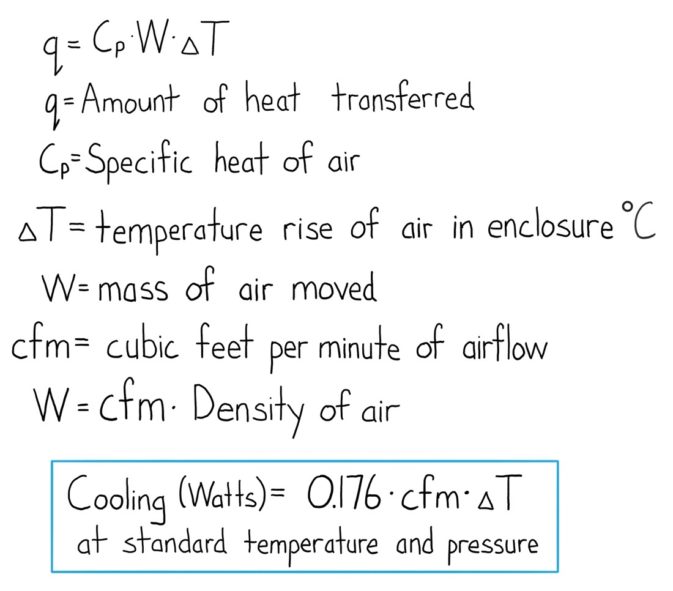 The job of the fan is to draw in cool air to replace hot air in the enclosure. Heat sinks and good PC board layout transfer heat from the electronic components and warm the air in the enclosure. For small, concentrated heat sources, micro fans can help increase heat transfer while reducing system size. The cooling equation above can find the approximate fan CFM required. For example, the Sunon UF3H3-710 is 17mm by 17mm square and 3mm thick and has a free airflow of 0.575 CFM. This part has only 0.085″ H2O of static pressure. While operating at half its open CFM with a 20°C temperature rise, it removes 1 Watt of heat. A passive heatsink with the same convection cooling capability is much larger in size.

Another fan datasheet parameter is the noise level, which is typically expressed in dBA at 1 meter distance. Higher numbers are louder. Above 55 dBA, people become annoyed by the sound. 60dBA is a typical fan noise specification. Fan noise is in a frequency range where ears are the most sensitive. Fan noise is made worse by air obstructions near the inlet and outlet. Examples of obstructions are cables, filters, brackets, PC boards, tall components, heat sinks, transformers, finger guards, filter assemblies, debris, walls, and panels.

Airflow rate is close to being directly proportional to fan RPMs. The air resistance of the system slows down both the airflow and the RPMs of the fan. Acoustic noise improves at these lower RPMs and fans are often more quiet with some airflow resistance. 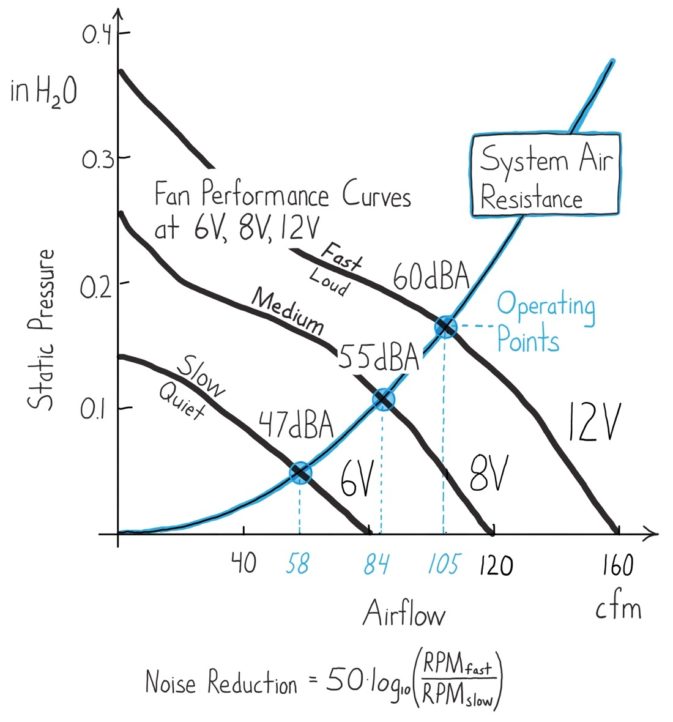 Fan speed control requires a variable DC voltage with enough current to drive the fan. The control circuit can be analog, using thermistors to set the analog voltage. Digital controls and firmware can provide a more complex fan algorithm. Fans will not start to spin until they have a sufficient voltage, but once they are started, they can sustain rotation at a lower voltage. This is why some systems have a surge of fan noise at startup. Use a fail-safe design so that software bugs do not cause dangerous over-temperature. A fan tachometer can also provide diagnostics to improve system control and safety.

Many DC fans require an actual DC voltage, and will not work with PWM control. DC fans have a pulsing load current, and PWM control may interact unfavorably with it.

Multiple fans can increase airflow in systems that run too hot. In a series fan configuration, one fan blows cool air into an enclosure while another fan exhausts warm air. For systems with high resistance to airflow, series fans are effective. Pressure of series fans nearly doubles, but the free airflow does not increase.

In a low air resistance system, use a parallel fan configuration with both fans blowing in the same direction. The free flow rate nearly doubles, but the static pressure does not increase. The graphs show examples of relative increase in airflow for the series and parallel combinations of fans. There is about a 30% increase in airflow when the fans are well matched to the system resistance.

DC fan motors generate a pulsing load current. The peaks of these current pulses are much higher than the average current. To prevent these currents from causing power supply ripple, make sure that there is no sensitive circuitry that shares the fan power supply. The frequency of the ripple current is low, which makes it hard to filter. Many systems use a separate power supply for the fans.

PC board-mounted fans such as micro-fans are fragile and require care in assembly. They are not washable, and the wires must be hand-soldered. They may require special padding and packaging for shipment of finished board assemblies. Handle fans by their edges. Don’t make a pile of them. They are precision balanced machines, and mishandling will add a slight wobble that increases acoustic noise and hurts reliability and cooling performance.

For printed circuit board fans, add a note to your manufacturing assembly drawing with any special requirements.