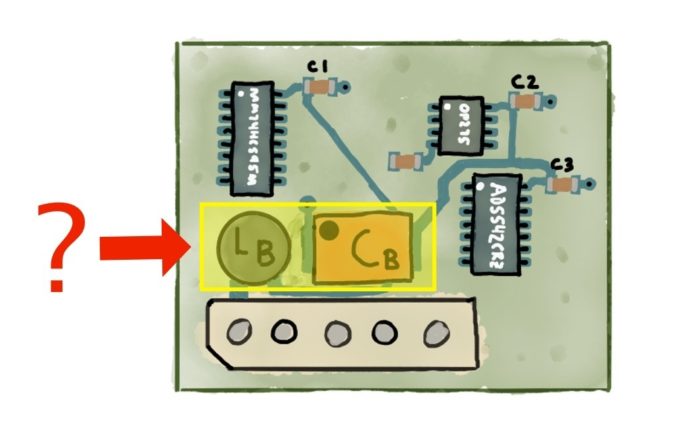 High frequency ripple passes right through a linear regulator. The ripple comes from switching power supplies, digital circuits, and radio interference. At frequencies above about 10kHz, most linear regulators begin to lose effectiveness. The small bypass capacitors distributed among ICs become effective at about 1MHz. A simple power supply decoupling filter made from an inductor and capacitor covers the gap between about 10kHz and 1MHz. Correct design of the decoupling filter ensures that it won’t cause more problems than it solves.

The chart above shows typical power supply filtering frequency ranges. Careful design with high-performance components can extend these frequency ranges, and not all designs have the same requirements for ripple rejection.

In the example design, the power supply regulator is assumed to be off-board, and a regulated voltage comes in through a connector. When there is a local regulator, the design is simpler and sometimes the power supply filter can be reduced.

The power supply filter comes after the regulator, so it needs to have a low DC voltage drop. The inductor datasheet has a value for the DC resistance. The voltage drop is about 20% more than this resistance times the current. The extra 20% accounts for the increase in the inductor’s copper wire resistance at higher temperatures.

The inductance value needed for the filter is not too hard to calculate. It should be about ten times larger than all the other inductances in series with the power supply. If there are no other inductors or ferrite beads in the supply, this inductance is due to cables and printed circuit board traces. The not-terribly-accurate approximation for calculating this inductance is to take the maximum length for the power to travel, and multiply by 1nH per millimeter. The inductance of power planes is much lower, and for this calculation, the length of power plane paths can be ignored.

In this example, I want the board to work on an extender cable that is about 300mm long, and the board is about 100mm X 100mm. A generous overall length is 500mm, which means that my power distribution inductance is something like 500nH. To make the power supply filter inductor about 10 times larger than this, I chose a 10uH +/- 30% inductor. The extra inductance accounts for the -30% tolerance. In addition to the initial tolerance, the inductor value drops with increasing current. For this part, at 2.4 Amps the inductance drops by another 35%.

I chose the Bourns SRU1028 series inductor. It has low height, is self-shielding, and readily available. I found it by searching Digi-Key for a low-cost 10uH inductor with a current rating of at least 2 Amps. I also like the Bourns datasheet because it has the specifications needed to make a good simulation model of the inductor. 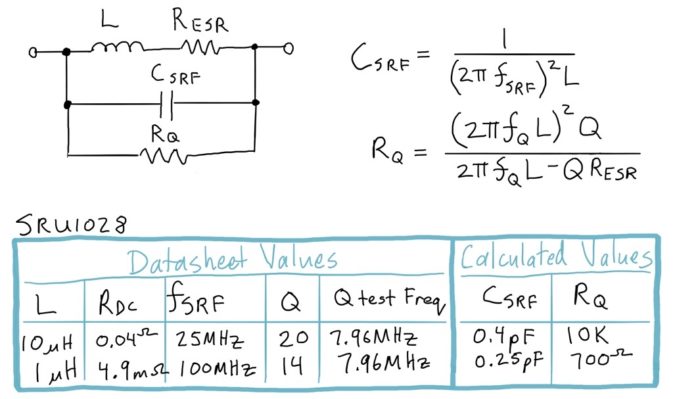 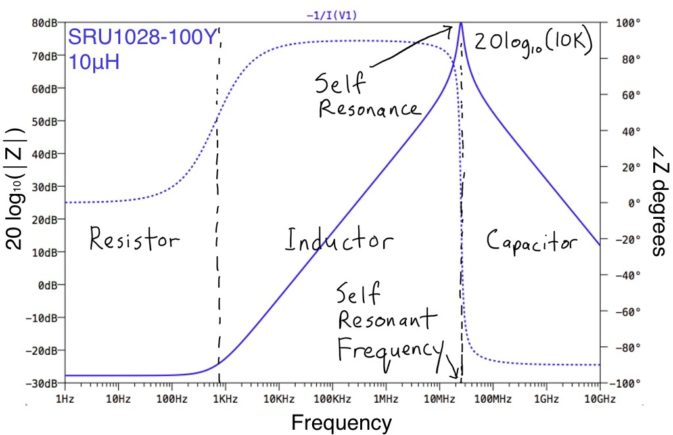 From this point on, a circuit simulator saves time. The free simulator LTspice created the above graph of inductor impedance using the simulation schematic below. 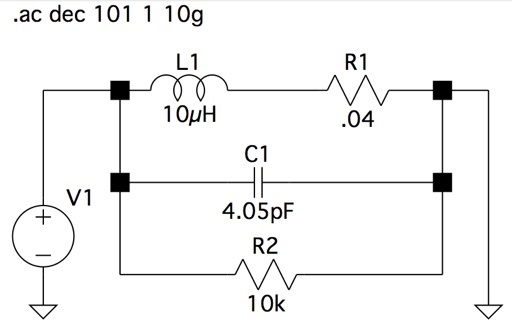 The voltage source V1 is a 1 Volt AC source. The impedance can be graphed with the expression -1/(i(V1)). To learn LTspice, see my Simulation Series tutorials on YouTube. LTspice AC analysis is in part one and part two, and transient analysis is in part three. The total video time is about 12 minutes.

It is easy to transform the inductor model schematic into a low-pass filter by adding a capacitor to the schematic. I chose the Kemet capacitor T491A106010A, which is a 10uF polarized tantalum capacitor with a maximum ESR of 3.8 Ω and a voltage rating of 10 V. 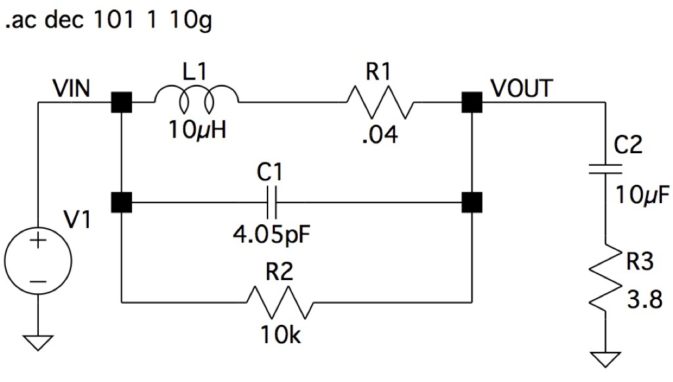 The frequency response of this filter is V(VOUT)/V(VIN), but since V(VIN) = 1 in my simulation, I get the same answer from a graph of V(VOUT). 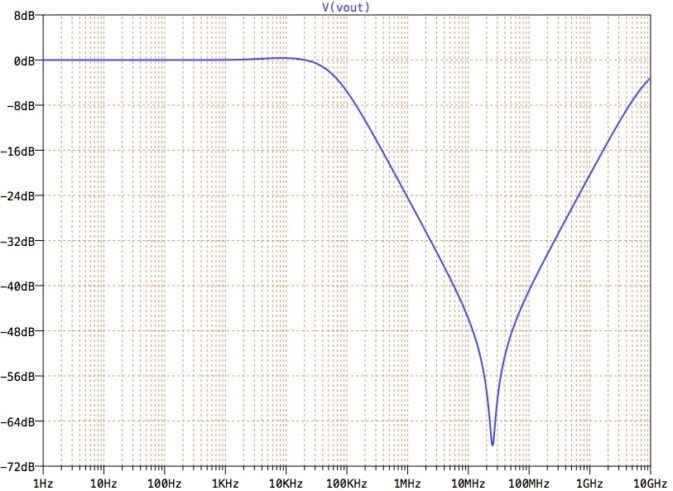 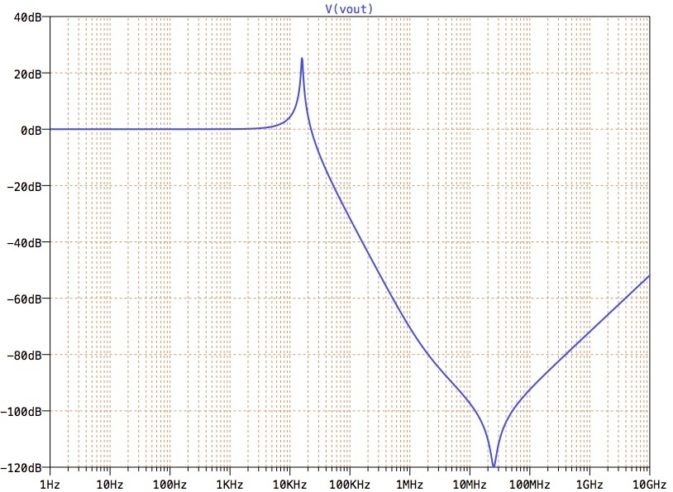 The peak at 15.9kHz is the resonance of LB and CB

Supply ripple at this frequency will increase instead of decrease. Because of the narrow frequency range of this resonance, the effects of the resonance are easy to miss in testing. The values of LB and CB have a loose tolerance and also drift over time and temperature.
Add a series resistor to solve this resonance problem. A good initial guess for the value of a damping resistor is:

So far, this example doesn’t have a load impedance or any load current. To see what this filter will do on a circuit board, the simulation needs to include printed circuit board trace inductance and bypass capacitors. At frequencies higher than 100MHz, transmission line effects further complicate the model. The next circuit example has a simplified model that represents typical loads found in PC board power supplies. You can look at your own circuits to estimate trace inductance using the rough inductance approximation of 1nH per millimeter. More accurate models can be made with a Power Integrity (PI) CAD tool. 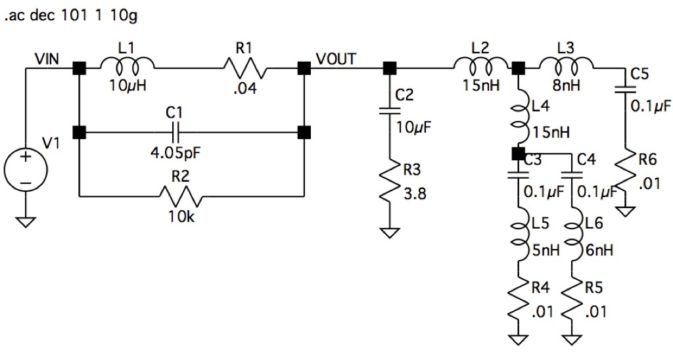 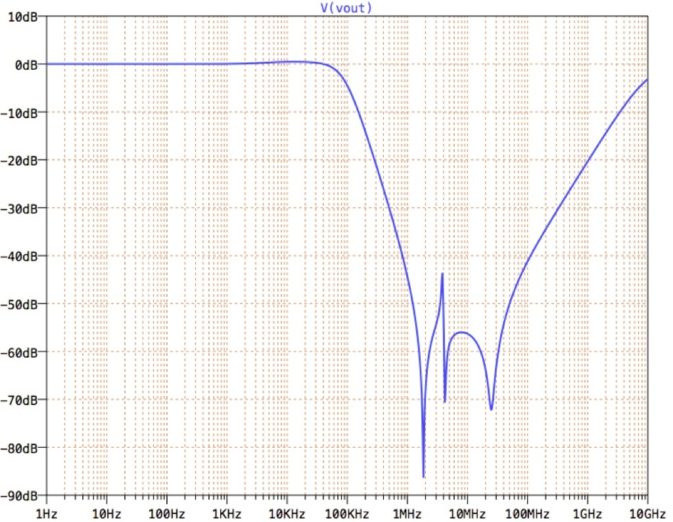 The extra simulated resonances are caused by the output load of the inductors and capacitors. The performance of this filter is still good, even with these resonances. The overall shape of the filter is preserved because the inductor is much larger than the sum of the small load inductors and the damped capacitor is much larger than the sum of the bypass capacitors.
There are still differences between this board and a real-world circuit. The real-world circuit would have a different response above about 100MHz due to transmission line effects. Also, other small capacitors and inductors become important, especially at frequencies above about 500MHz.
Leaving out the power supply filter, or using a large undamped capacitor without an inductor leads to resonances such as these: 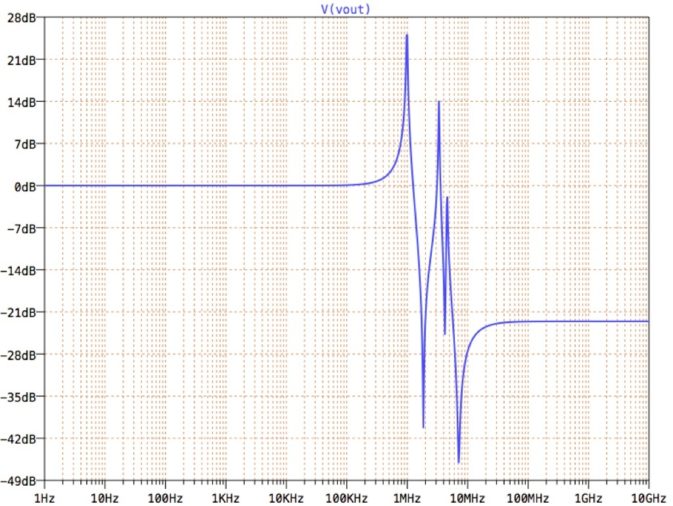 Local bypass capacitors provide local charge storage that supplies transient current to high-frequency pulsating loads. To hold the supply voltage steady, larger pulsing load currents require larger bypass capacitors. An example of a pulsed load is a processor going in and out of low-power sleep mode. Analyze each high-current pulsed load for voltage ripple in the supply.
Bypass capacitors can also resonate with inductance in the power distribution network. Damping the resonances at the power supply input filter does not guarantee that all resonances due to load current will also be damped, but it often helps. To demonstrate a potential problem, here is the undamped (R3 = 0.01 Ohm) version of the filter with an AC current source at one of the load points: 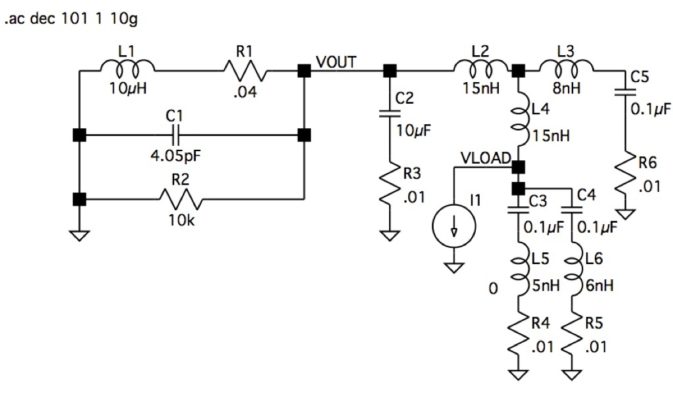 The impedance at VLOAD is v(VLOAD)/i(I1). Since the AC current in I1 is set to 1, the impedance is just v(VLOAD):

The undamped resonance circled above is at 1.87 MHz. This is one frequency where a pulsed load will cause a problem. 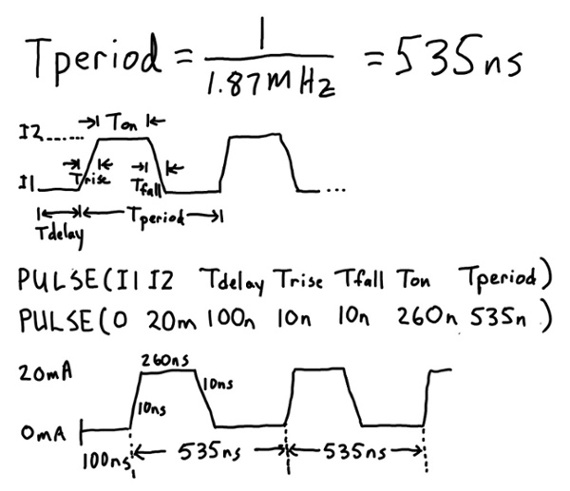 The sine wave shape of the ripple voltage in this example is typical for undamped, high-Q resonances in the power distribution. The undamped resonance acts as a filter that converts the current pulses into a sinusoidal voltage waveform:

If the voltage is still growing at the end of the simulation, increase the simulation time to find the maximum level. Sharper (higher Q factor) resonances take longer to settle.
In the example of sleep-mode current pulses, a software change can cause the frequency of the pulses to change. The large voltage swings due to resonance only occur when the sleep cycle period aligns with the resonant frequency. In development, this can cause mysterious bugs that appear to be software-related but are actually caused by hardware. In production, component variation will shift the resonant frequencies and cause yield problems. In use, temperature changes and component drift will shift the resonant frequencies, leading to product failure.
The next simulation shows the damped version, with resistor R3 set to 3.8 Ohms. The AC analysis shows that the largest two high-Q resonances have been damped:

This changes the shape and decreases the voltage waveform caused by the pulsed load current.